The Papua-class was a supply ship class used by the Principality of Zeon during the One Year War. It first appeared in the anime series Mobile Suit Gundam.

The Papua-class line of vessels were designed by the Principality of Zeon to serve as support vessels. The Zeon usually used these ships to move supplies and weapons to and from the front lines. These ships also carried many of the Zeon Zaku units; however, these ships were useful as mobile suit carriers since the Zeon navy was designed around MS combat. A single Papua class ship can supply two Musai-class cruisers. The class performed exceptionally well in its role as support carriers and supply vessels, but they were old and outdated by the time of the One Year War, so they were eventually phased out in favor of the newer and more efficient Pazock class.

The Papua-class is equipped with several point defense machine guns, some in external 2-barrel mounts and some in 4-barrel ball mounts. These weapons are shell-firing weapons and are ideal for defending against enemy fighters or mobile suits. They are virtually useless against enemy ships.

During the first Zeon descent operation of the One Year War, the Papua-class was the primary class of vessel used as carriers for the drop troops. A line of Musai-class cruisers comprised a front and engaged the Earth Federation fleet while an immense force of Papua-class ships launched waves of Heavy Lift Vehicles carrying Zeon mobile suits that comprised the primary drop forces. These HLVs were joined by Komusai shuttles launched from the available Musai-class cruisers.

These ships were designed to operate independently to resupply Zeon's space navy, and are frequently seen throughout the One Year War. One ship, the Dried Fish, served as the flagship and primary mobile suit carrier of Zeon's Living Dead Division. It was later hijacked by the Moore Brotherhood after their ship was destroyed, and later reclaimed by Zeon reinforcements.

Several of these ships served in the battle of A Baoa Qu, supplying ships with ammunition and supplies in the middle of the vicious fighting to keep as many Zeon allies in the fight as possible.

A formation of Papua's deploying H.L.V.'s during the Earth Invasion. 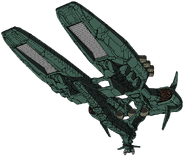