The Gundam Wiki
Register
Don't have an account?
Sign In
Advertisement
in: Characters, Universal Century characters, Male,
and 2 more

Originally a member of the Federation’s Jupiter Energy Fleet, Scirocco is often known as “The Man from Jupiter.” An intelligent and charismatic man, Scirocco is capable of gathering individuals, typically women, to his side by either persuasion or manipulation. Scirocco also has an arrogant personality, believing himself to be above all others as a man bringing about a great change for human history where humanity would be ruled by a select few. He could also be utterly ruthless, such as when he killed Jamitov to usurp him as leader of the Titans.

Both a skilled pilot and strategist, Scirocco is considered a sinister genius by both the AEUG and the Titans. A gifted mobile suit designer, Scirocco built both the PMX-000 Messala and his own personal unit the PMX-003 The-O, as well as assisted in the development of several other mobile suits. He is also an exceptional Newtype, possessing abilities strong enough to rival other powerful Newtypes such as Kamille Bidan and Haman Karn.

Paptimus Scirocco's service with the Earth Federation began when he joined the Jupiter Energy Fleet, and this is when he designed and built his first mobile suit, the PMX-000 Messala; a transforming mobile suit with powerful thrusters that can fly more easily in the strong gravitational pull of the gas giant. He would also take command of the large unarmed freighter, the Jupitris. His piloting and leadership skills in this role would earn him recognition by the Titans.

Scirocco first appeared while pursuing Bright Noa and several civilians in his Messala. He withdraws after Kamille Bidan and Char Aznable intervene, but he exhibits great piloting skills that are virtually on par with Char's. Later he attempts to destroy the AEUG's main force as they prepare to attack Jaburo and destroys one of their ships with a single blow from his mobile suit. He withdraws again to avoid being pulled into Earth's gravity after Emma Sheen engages him in battle followed by Kamille and Char.[1]

It is later revealed by Jamitov Hymen that Scirocco signed a contract pledging his loyalty to the Titans with his own blood. His quick ascension up the ranks earned him the wrath of several other Titan officers, such as Bask Om, Jerid Messa, and Jamaican Daninghan. Even Jamitov has grave reservations about where Scirocco's loyalty lies, but he still keeps him on as an officer. But while he clashed with the Titans leadership, he earned the loyalty of others, including Sarah Zabiarov, and later Yazan Gable and the AEUG defector, Reccoa Londe.[2][3]

Throughout the course of the war, Scirocco along with his minions executed all kinds of underhanded plots to help him assume control over the Titans, and eventually the Earth Sphere. When Jamaican attempts to drop a colony on the lunar city Granada, he sends Sarah to the Argama and alerts the AEUG so that they can successfully thwart Jamaican's plan. He allows Reccoa to leave his ship, the Jupitris, after sensing that she was a spy, an act that continues to dog Reccoa until she finally defects from the AEUG and joins him shortly after the AEUG's attack on Kilimanjaro. He also successfully forges a brief alliance with Axis Zeon, but Haman Karn later disables the Gryps II Colony Laser and sends the Axis asteroid flying into the Titans' stronghold at the Gate of Zedan.

Eventually, Scirocco pulls off a coup d'état during negotiations aboard the Axis Zeon flagship Gwadan involving Char, Haman, and Jamitov. Sarah Zabiarov in another of Scirocco's designed mobile suits, the PMX-002 Bolinoak Sammahn, provided support by shooting into the ship where they were meeting, missing all occupants and leaving Scirocco and Jamitov alone. He condescendingly taunted his superior by assassinating Jamitov, and blaming Haman for it. Afterward, while engaged in a battle with Haman alongside Reccoa and Sarah, Katz Kobayashi tries to kill him out of hope that it would free Sarah from his influence, but she takes the shot that is meant for him and dies. Although Scirocco mostly saw Sarah as a means to an end, he forgets all about Haman and targets Katz, but Reccoa gets in his way, puzzling him. However, Kamille, Char, and Fa Yuiry intervene, forcing him and Reccoa to retreat.[4]

He later sends Reccoa out on a mission to destroy the Dogosse Giar, which by this time was commanded by Bask. By removing Bask, Scirocco finally assumed complete control over the Titans, which brought him one huge step closer towards realizing his goal of world domination.[5]

In his final appearance, Scirocco fights a four-way battle with Kamille, Char, and Haman over control of the Gryps 2 colony laser, that ultimately breaks off with him fighting Kamille and the laser in AEUG control. With the loss of Gryps 2 and the Titans fleet, Scirocco sought to escape the battle with the Jupitris, but was intercepted by Kamille. Towards the end of this fight, Kamille calls upon the spirits of several other characters, AEUG and Titan alike, to lend him their strength in order to defeat Scirocco. The power exhibited by Kamille's Zeta Gundam causes Scirocco's mobile suit The O to stall. Kamille quickly transforms the Zeta into its Waverider form and rams The O into the Jupitris, impaling Scirocco on the top.

However, there are two versions of the events that occur in the next few moments. In the TV version, Scirocco vows he won't die alone and uses his last ounce of strength to deliver a crippling blow that leaves Kamille insane. However, the movie version scraps this entire sequence.

Scirocco has shown up in many other games, including the Super Robot Wars franchise, the SD Gundam G Generation franchise, and Dynasty Warriors Gundam 2. Many of his game appearances go about the same way it's happened in the original series, with Scirocco attempting to take down Kamille's mind before he dies. However, ever since Super Robot Wars 3, players have always been given the option to prevent that from happening by having Four Murasame kept alive, thus allowing Kamille to stay grounded as Scirocco dies.

Scirroco also was part of one of the few recurring storylines in the Classic SRW games, having been a part of the Divine Crusaders in SRW 2 and eventually expelled after he attempted to seize control of their organization, and this was retained and referenced in SRW 3, where he seeks to strike back at them and obtain the Valsion Custom, an original series unit he would be able to pilot, being one of the few non-original, licensed characters to do so, even serving as the final boss in some routes.

The Alpha series was also altered due to his being aligned with the Jupiter Empire in that series instead of taking over the Titans, whom he simply leaves (having served there to spy on them) later on in the game, which allows the Titans to exist into Alpha Gaiden past his death.

In Gihren's Ambition: The Menace of Axis V during the Titans' scenario if the player fulfilled the conditions and alignment remains Law. Scirocco will continue to support Jamitov until the end of game and will not betray him. 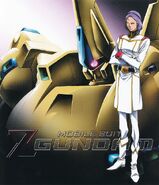 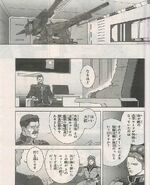