The PX-00531 ν Gundam Pre-Test Type is a mobile suit from the Mobile Suit Gundam: The Revival of Zeon.

The PX-00531 ν Gundam Pre-Test Type is an Earth Federation Forces testbed MS and predecessor to the RX-93 ν Gundam. It was scheduled to be installed with a Psycommu system after undergoing several tests. The "PX-00531" designation is the serial number denotes its production facility.

During its transportation over Western Europe, its unknown pilot ordered the prototype to be dropped from the aircraft to stop a Neo Zeon surprise attack on the Verboten base in Western Europe. However, it is destroyed in battle with Lieutenant Kurtz and his MSN-04B (AMS-04B) Sazabi due to overheating and inadequate performance adjustments. Development of the ν Gundam would be further delayed due to its destruction. 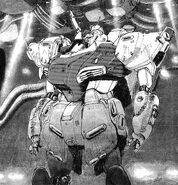 Retrieved from "https://gundam.fandom.com/wiki/PX-00531_ν_Gundam_Pre-Test_Type?oldid=497053"
Community content is available under CC-BY-SA unless otherwise noted.