The PPMS-18E Kämpfer Amazing is a Gunpla from the Gundam Build Fighters anime series. Based on the MS-18E Kämpfer, it is built by Plavsky Particle System Engineering (PPSE) and primarily controlled by Meijin Kawaguchi.

Meijin Kawaguchi's customized Gunpla developed by PPSE, the Kämpfer Amazing is a variant of the Kämpfer that first appeared in Mobile Suit Gundam 0080: War in the Pocket and has been redesigned from the ground up to meet his needs. It is equipped with new technologies such as high polycaps in all joints and is coated in emotion paint. Weapon wise, the Kämpfer Amazing is equipped with a pair of knives, a pair of beam sabers and eight heat plates on its limbs. In order to boost its performance, it is often equipped with the Amazing Weapons Binders, which not only contains additional weapons, but also contains thrusters to boost the Gunpla's movement. Usually a pair of these binders are attached to the back, but additional binders can also attach to the legs. What weapons are stored within the binders are decided prior to the battle according to the predicted battle condition.

A physical knife used for close combat, the Kämpfer Amazing is equipped with a pair of them. These knives can also be used as mid-range throwing weapons, and are stored in the waist-mounted holsters.

A super-heated melee weapon, the heat plates are the fin-like protrusions on the legs and arms.

A sword-like beam weapon that is used for close combat, the Kämpfer Amazing is equipped with a pair of them and they are stored in the thighs like the normal Kämpfer.

A pair of beam pistols that can be stored in the Amazing Weapon Binders. The Amazing Pistols have high rate of fire and their small size allow them to be used in close combat. They are also used for intercepting missiles, destroying enemy sensors, etc., in place of vulcan guns. Can be used as various types of rifles by adding barrels of different length.

The Amazing Pistol attached with a long barrel, it serves as the Kämpfer Amazing's main weapon in most combat situation. It is easy to handle and has high firepower.

This is the Amazing Pistol with an even longer barrel than the Amazing Rifle's. It is designed for long-range attacks and can achieve amazing accuracy when used with the Kämpfer Amazing's sensors. It has extremely high firepower, but a slow rate of fire.

A pair of beam machine guns that can be stored in the Amazing Weapon Binders. Their barrels are shorter than the Amazing Rifle, but they have faster rate of fire.

A five-barrel gatling gun with a high rate of fire. When not in use, it is stored in the Amazing Weapon Binders.

A foldable quadruple rocket launcher, it is in an unfolded state when stored in the Amazing Weapon Binders.

A pair of handheld physical melee weapons given to the Kämpfer Amazing at random during the Original Weapon Battle.

The Kämpfer Amazing's attachable weapons storage equipment, it is possible to store more than one weapon within each binder. The binders can be attached to the back and/or to the legs, and are equipped with thrusters to offset the added weight when they are attached. These thrusters can also boost the suit's mobility. The binders can be ejected from the suit if they become useless or launched in the direction of the enemy's attack to intercept it. Up to four binders can be attached to the Gunpla. The Amazing Weapons Binders are developed based on the Influx Weapon Binders of the RX-93ν-2I Hi-ν Gundam Influx, which is an earlier Gunpla built by Allan Adams.

History of the Kämpfer Amazing can be found on Meijin Kawaguchi' s page. 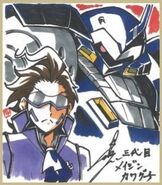 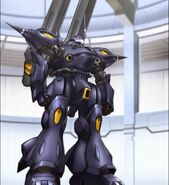