The modified version of the completed Gundam Amazing Exia, the Gundam Exia Dark Matter was created for the sole purpose of defeating Reiji and Sei Iori. The Exia Dark Matter's appearance is slightly altered from its predecessor, and is now equipped with the Brinicle and Prominence Blade for close combat, a Dark Matter Rifle for ranged combat, and two arm-mounted GN Vulcans which can also emit beam sabers. The suit also possesses the Trans-Am system and a back-mounted support unit - the Dark Matter Booster, which is equipped with two detachable Dark Matter Blades and is capable of functioning as a separate unit.

A blade with freezing power, this ability is due to the low energy Plavsky particles stored within the weapon. When the Brinicle Blade comes into contact with its target, the low energy particles will absorb energy from the target, freezing it. As this effect is based on the particles' energy state, the Brinicle Blade can even freeze beam sabers upon contact. When not in use, it is stored on the right hip. Appearance-wise, it resembles a color variant of Amazing Exia's Amazing GN Blade.

A heat blade that can be ignited to sharply enhance slashing and piercing power. The touch of the Prominence Blade can rapidly heat up an object that has been frozen by the Brinicle Blade, and this will cause the object to become very brittle. The blade is stored on the left hip when not in use. It has the same hilt as the Brinicle Blade, but its blade section resembles the Amazing Exia's Amazing GN Sword, albeit with clear orange parts instead of clear green.

Located on Dark Matter's forearm, the GN Vulcans are smaller versions of GN Beam weaponry. They have a high rate of fire, but are low in power. As a result, they are mainly used as secondary ranged weapon or as last resort ranged weapons. The GN Vulcans can also generate beam sabers for close combat, but they are only used as a last resort weapon.

An arm-mounted beam rifle derived from the Amazing Exia's Amazing GN Sword. It is the suit's main long-ranged weapon and has a GN Vulcan/Beam Saber in the shield-like attachment.

The shield-like attachment of the Dark Matter Rifle has an emitter that can function as GN Vulcan or generate a beam saber for close combat. The Exia Dark Matter can perform Sword-Ki attacks with this beam saber identical to those used by the 侍ノ弐 Sengoku Astray Gundam, negating powerful beam attacks such as those from the Star Build Strike.

Two solid blades with high keenness, they can be detached from the Dark Matter Booster and used as handheld weapons. The Dark Matter Blades function like GN Swords and their cutting power increase during Trans-Am. Thus, they are preferred over the Brinicle Blade or Prominence Blade as the weapon of choice when Trans-Am is activated. When not in use, they function as part of the Dark Matter Booster's wings.

Generated by the Dark Matter Booster, it is a GN Field-like defensive barrier.

A powered-up unit mounted to the back of the Exia Dark Matter, visually it is a recolored version of the Amazing Exia's Trans-Am Booster, but it is unknown if there is any other modifications. It boosts the suit's speed and mobility when docked and provides it with additional weapons in the form of two Dark Matter Blades. It can detach from the suit and function independently as a support unit. In this form, it has an appearance similar to that of a bird and can be used for reconnaissance, support attacks, etc. The Dark Matter Booster is powered by a GN Drive, granting it higher destructive power than other similar support units. This GN Drive can automatically dock with the main suit if it remains undamaged after the Dark Matter Booster has been destroyed.

The Gundam Exia Dark Matter can utilize the Plavsky Particles and initiate Trans-Am, improving its combat performance by three times for a short period of time. However, the unit will suffer a sharp reduction of performance after usage of the system.

More information of the Gundam Exia Dark Matter can be found on Meijin Kawaguchi's page. 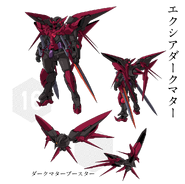 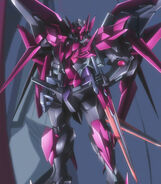 With GN Drive from the destroyed Dark Matter Booster 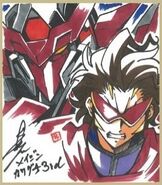