The PPGN-001 Gundam Amazing Exia is a custom Gunpla from the anime series, Gundam Build Fighters, and is based on an incomplete Gunpla developed by Plavsky Particle System Engineering. It is piloted by Meijin Kawaguchi.

Originally an incomplete Exia based Gunpla codenamed A5, it is modified into its current form by Allan Adams and Meijin Kawaguchi. However, the Gundam Amazing Exia was only 80% complete when it was used in the semi-finals, and some of its system was not yet fully adjusted. The incomplete Gundam Amazing Exia is armed with an Amazing GN Sword, an Amazing GN Shield as well as the wrist mounted GN Vulcans. It also has a Trans-Am System installed for dire situations. The completed form of Amazing Exia has an additional sword stored on the hip and a Trans-Am Booster on its back, which not only improve the suit's performance but also stores an extra pair of handheld blades.

A custom sword-gun weapon used by the Amazing Exia. Like the Exia's GN Sword and Exia R2's GN Sword Kai, it can be used as a sword for close combat or transform into rifle mode for ranged combat by folding up the sword blade. The weapon also has an additional GN Vulcan/Beam Saber in the shield-like attachment, and the physical sword blade is similar to the GN Sword Kai's.

The shield-like attachment of the Amazing GN Sword has an emitter that can function as GN Vulcan or generate a beam saber for close combat.

These weapons are smaller versions of GN Beam weaponry and are located on Amazing Exia's wrists. They have a high rate of fire, but are low in power. As a result, they mainly serve as secondary weapons and are often used to engage targets in a defensive capacity.

A custom shield created specifically for Amazing Exia. It is mounted on the left forearm. The shield was omitted when the Gunpla was converted into Exia Dark Matter.

A handheld sword used by the Amazing Exia in its complete form. It is stored on the left hip when not in use. It has a blade similar to the original Exia's GN Sword and is visually identical to the PPGN-001 Gundam Exia Dark Matter's Brinicle Blade, but whether its function is the same is unknown.

As a last resort, the Gundam Amazing Exia can utilize the Plavsky Particles and initiate Trans-Am, improving its combat capabilities by three times for a short period of time. The downside to this system is that the unit will suffer a sharp reduction of performance after complete usage. Furthermore, using it when the model is incomplete and not fully adjusted is risky.

A back-mounted power-up unit created for the completed form of the Amazing Exia, it boosts the suit's speed as well as mobility and provides it with additional weapons in the form of two Trans-Am GN Blades. It can detach from the suit and function independently as a support unit; in this form, it has an appearance similar to that of a bird and can be used for reconnaissance, support attacks, etc. Its full combat capabilities are unknown, as the completed Amazing Exia is seized by PPSE soon after its completion and turned into the Dark Matter Exia.

More information of the Gundam Exia Amazing can be found on Meijin Kawaguchi's page.

When the Gundam Exia Dark Matter was defeated by Star Build Strike Gundam, it reverted back to the form of Gundam Amazing Exia. The Gunpla was later repaired to help fight the Mocks that were activated by the out of control large Arista crystal. Its damaged torso was replaced by one from the original Gundam Exia, while the damaged left shoulder armor was replaced by a cloak. The Amazing Exia Repair seems to be only equipped with the Amazing GN Sword and GN Vulcans and had no problem using Trans-Am. 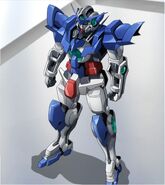 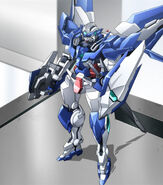 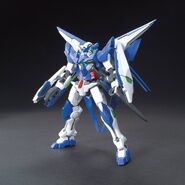 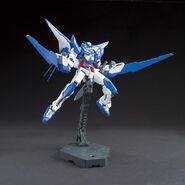