"Combat" is not in the list of possible values (Assault, Heavy Assault, Defense, Multi-Mode, Close Quarters Combat, High Mobility, Artillery, Sniper, Reconnaissance, Support, General-Purpose, All-Purpose) for this property.
The PMX-005 Breda is a land-based mobile suit variant of the PMX-003 The-O II, it was featured in Kazuhisa Kondo's manga, Mobile Suit Gundam: The Revival of Zeon. It was later featured in the video game Mobile Suit Gundam: Advanced Operation.

A land-based variant of the PMX-003 The-O II, The PMX-005 Breda was basically a scaled-down version of the The-O II, whose large mass made it an easy target to hit and cause severe damage despite it's immense firepower. The Breda was fielded on Earth and has seen actual combat, and at least ten models of the PMX-005 are known to have been produced. In U.C. 0089, Neo Zeon ace Maj. Gerald Sinclair was known to have piloted this machine. 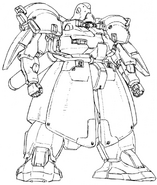 Retrieved from "https://gundam.fandom.com/wiki/PMX-005_Breda?oldid=444277"
Community content is available under CC-BY-SA unless otherwise noted.