The PMX-001 Palace Athene is a mobile suit featured in Mobile Suit Zeta Gundam and was piloted by Reccoa Londe.

The Palace Athene was the second mobile suit built by Paptimus Scirocco aboard the Jupitris during the Gryps War. Scirocco originally intended for the Palace Athene to operate in a team alongside the PMX-002 Bolinoak Sammahn and the PMX-003 The-O. As such, each mobile suit was given a designated function, with the Palace Athene serving as a heavy attack unit with sufficient firepower to sink multiple space warships. Its full loadout consisted of six beam cannons on its shoulders and forearms, a twin beam gun with grenade launcher, a shield fitted with eight missile launchers and two beam sabers, a pair of movable shields, two foot claws and eight large missiles.

To carry and operate such a large amount of weaponry, the Palace Athene's base frame was enlarged and the mobile suit became comparable in size to Scirocco's first handmade mobile suit, the PMX-000 Messala. However, its large size affected its mobility and maneuverability, putting it at a disadvantage during close range combat with other mobile suits. It was said that the frame's large size was also because there was a plan to fit the mobile suit with a Psycommu-type interface, but this cannot be confirmed. The Palace Athene's backpack contains two thrusters to support the main thruster mounted in the skirt armor, and this design improved the heavy mobile suit's power to weight ratio.

A ranged beam weapon mounted on each forearm.

Two scattering beam cannons are mounted on each shoulder, one at the front and another at the back. These beam cannons emit a spread of beams and can be used to restrain enemy's movements in close combat.

A pair of shields are flexibly mounted on either sides of the backpack and they contain the mounting points for the large missiles.

Four large missiles can be optionally carried on each of the backpack-mounted movable shield, for a total of eight missiles. These missiles are meant for anti-ship purposes and their destructive power are beyond those of normal missiles. With the large missiles, the Palace Athene can sink multiple space warships by itself. The tip of each missile has an optical seeker that retains sufficient recognition and tracking ability even when under the influence of Minovsky particles.

Mounted on the right forearm, it has a long attack range due to the pair of long barrels. It is also referred to as a "Beam Rifle" and mounts a grenade launcher.

Mounted on the twin beam gun, it fires the same grenades as the PMX-000 Messala.

A customized shield can be mounted on the left forearm. Besides being a defensive armament, it also stores two beam sabers and has eight built-in small missile launcher.

A pair of beam sabers are stored behind the shield and they have the same output as normal beam sabers. Handheld when in use.

Eight small missile launchers are built into the shield, with their openings located on the shield's surface. Each launcher has five missiles, for a total of forty missiles.

The foot can transform into claws when the heel spurs rotate forward and the toes pivot down, enabling the Palace Athene's legs to be used as large arms. Not only can the foot claws be used in melee combat, they can also be used to grip onto surfaces in low gravity area such as asteroids.

Mobile Suit Zeta Gundam: A New Translation III - Love Is the Pulse of the Stars 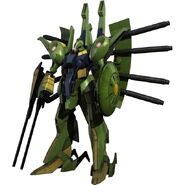 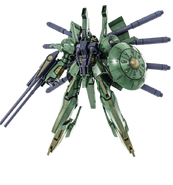