The PMX-000 Messala is a transformable mobile armor from the series Mobile Suit Zeta Gundam.

The Messala is the first of five mobile weapons personally produced by the powerful Newtype Paptimus Scirocco on board the transport ship Jupitris. As the Messala was originally used to fly in the atmosphere of Jupiter, it is equipped with powerful thrusters to counter the planet's high gravitational pull. Because of this, when used under Earth’s atmosphere, it is extremely fast and agile. The Messala is heavily armed with a pair of mega particle cannons, two missile pods, two beam sabers, two arm claws containing grenade launchers and vulcan guns, and two leg claws. Thanks to these weapons, the Messala is a deadly enemy in both close and long range combat. While the total thrust of the Messala is frequently stated to be 96,000kg, this value is only derived from the combined thruster outputs of the six main thrusters in the backpack, and does not include the output of the tail and leg thrusters.[1][2][3] As such, the mobile suit's actual total thrust is unknown, with given figures ranging from a minimum of 196,000kg to at least 200,000kg.[1][2][3]

The Messala has two beam sabers stored in its wrists and their grips extend when in use.

Each of the large back binders house a mega particle cannon along with the majority of the Messala's thrusters. Powered directly by the Messala's generator, its destructive power is comparable to those of a battleship.

Mounted in each shoulder, they are unobstructed in both of the Messala's forms. The micro missiles housed within have high accuracy due to the seeker mounted in their tips.

Attached to each of the wrists of the Messala is a set of three-fingered claws that acts as sub-arm unit. Capable of crushing enemy units, the two sets of arm claws are also armed with grenade launchers and vulcan guns.

Inside each arm claw is a 3-round grenade launcher, the claw has to open for the grenade to be fired.

On the sides of each arm claw are two vulcan guns, which are likely used against missiles or other lightly armored targets.

The feet of the Messala can function as claws for capturing and crushing enemy unit.

The Messala was first introduced when Scirocco used it to attack the shuttle Temptation under the command of Bright Noa. During this attack, it had a short battle with the RX-178 Gundam Mk-II piloted by Kamille Bidan, the MSN-00100 Hyaku Shiki piloted by Quattro Bajeena, and the RMS-099 Rick Dias piloted by Emma Sheen. In this battle, it proved to be a dangerous enemy as the three AEUG pilots weren’t able to hit it due to its incredible speed. Scirocco used Messala a second time acting as a vanguard for the Titans' fleet during the AEUG's orbital drop operation to attack Jaburo. With the speed and power of the Messala, Scirocco was able to destroy a number of the AEUG's Salamis Kai-class cruisers. 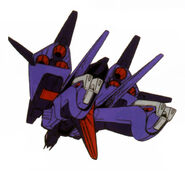 MS mode in Side Story of Gundam Zeta

MA mode in Side Story of Gundam Zeta