Hiroto's Gunpla based on the RX-78 Gundam. It's a size smaller compared to ordinary Gunplas and doesn't have much firepower, but is capable of going toe-to-toe in combat with other Gunplas due to Hiroto's controlling techniques which effectively utilizes the small size and weight of the MS.

The standard equipment of the Core Gundam, this ranged weapon is effective in close to medium range. It can be stored on the rear waist when not in use.

Close range weapon stored on the back, it emits a short torch-like beam blade when deployed. Its robust hilt can also be used as a striking weapon.

A defensive armament mounted on the arm. It can be stored on the back when not in use.

A system that the Core Gundam uses to dock with support mechas named after the various planets of the Solar System to form various Gundams. This not only changes its equipment but also alters its characteristics, with each resulting Gundam having different performance. Besides this "core change", there is also a "limited change" that mixes equipment from different support mechas. Each support mecha has flight capabilities, and can function as a sub-flight system as well as provide combat support in battles. Additional support mecha can be deployed for switching between forms mid-battle and/or for support. However, Hiroto sometimes have difficulties controlling the support mecha and the Gundam simultaneously if the battle got heated.

The support mecha for the Core Gundam which consists of combination parts for the Earthree Gundam, a well balanced form.

The support mecha that carries the combination parts for the Marsfour Gundam, a close combat form.

The support mecha that carries the combination parts for the Veetwo Gundam, a heavy weapons form.

The support mecha that carries the combination parts for the Mercuone Gundam, a underwater combat form.

On the launch pad with Earth Armor (Ep 01) 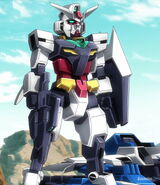 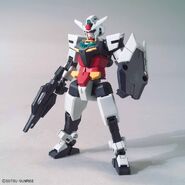 Retrieved from "https://gundam.fandom.com/wiki/PFF-X7_Core_Gundam?oldid=449773"
Community content is available under CC-BY-SA unless otherwise noted.