The Saturnix Gundam is the heavily equipped melee combat form of the Core Gundam II docked with the Saturn Armor through the PLANETS System. Its equipment is based on the motif of tools and heavy machinery and was built under the concept of crushing opponents with overwhelming power. The Saturn Armor has built-in power enhancement device that can deliver a heavy blow to its enemies from any location. The armor was originally designed for combat against units that used Gundam Frames, but it was deployed under unexpected circumstances on the Planet Eldora against an Universal Century-type enemy. Although it wasn't named after a devil, the Gundam has the appearance of one.

A drill unit built exclusively for the Saturnix Armor. It can penetrate various armor by drilling at super high speeds and applying continuous blows.

An arm unit that can not only pinch targets strongly, but also crushes them. It's almost impossible for enemies caught by it to escape.

A large, heavy tool/armament created by connecting the Breaker Drill and Vise Pliers. Their destructive power is further enhanced through the combined output of both units. The Meganic Driver can be equipped on the forearm, and through rotation, it is possible to switch between using the the Breaker Drill section or the Vise Pliers section.

As the output of the Core Gundam II's Core Sabers have been improved, the performance of the Saturnix Gundam's Beam Sabers are enhanced as well. The pair of Beam Sabers are stored on the back when not in use.

Carried over from the Core Gundam II, it is mounted on the back and can function as handheld shield. It also has built-in Beam Vulcans.

The roller units on both heels allow for high-speed maneuvers on land despite being a heavily equipped Mobile Suit.

Like the original Core Gundam, the Core Gundam II can make use of the PLANETS System to dock with support mechas named after the various planets of the Solar System, changing its equipment, characteristics and performance. This change can be done even during mid-combat, with the Saturnix Gundam using the Saturn Armor. The Saturn Armor specializes in assault tactics using the Meganic Driver mounted on the unit's center.

Sometime after the victory over Alus, the Saturnix Armor was given to Freddie, who spends some time test-flying the machine. 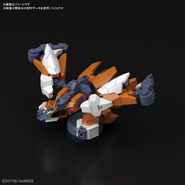 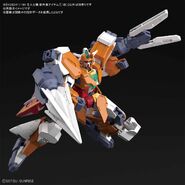