The Mercuone Gundam has a silhouette with large fins across its entire body and was designed to have excellent mobility in the depths of the sea, and the armor sections with improved pressure resistance have also enhanced its defensive capabilities. It has a large backpack with large fins for attitude control and water jets for underwater propulsion. It is also equipped with active sonar for detecting enemies underwater and its armaments include the Water Needle Gun equipped with Underwater Bits and Fin Zambers.

A portable firearm dedicated to the Mercuone Gundam. Besides firing needles from the top, it also has two Underwater Bits at the sides that can fire small needles and they can be remote-controlled to attack from multiple directions. A huge harpoon to finish off enemies is also installed in the center and can be rewound with a wire after being released.

Unfolding blade-like equipment mounted on the backpack. They are usually used with a reverse grip and are capable of flowing attacks that do not hinder the unit's maneuvering postures when operating underwater.

The Mercuone Gundam played an active part during the underwater battle to reach the Silver Tower in the mission on Eldora. 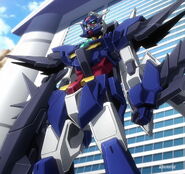 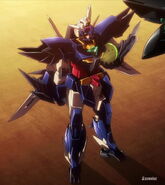 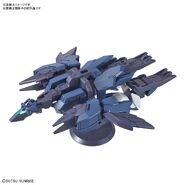 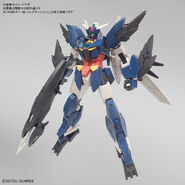 Retrieved from "https://gundam.fandom.com/wiki/PFF-X7/M1_Mercuone_Gundam?oldid=469696"
Community content is available under CC-BY-SA unless otherwise noted.