The PF-78-3A Gundam Amazing Red Warrior is a Gunpla from the anime series Gundam Build Fighters Try. It is a variant of the PF-78-3 Perfect Gundam III.

Built by Meijin Kawaguchi for his own use, the Gundam Amazing Red Warrior is a customized version of the PF-78-3 Perfect Gundam III "Red Warrior" that appears in the manga Plamo-Kyoshiro. This Gunpla is also the Meijin's way of honoring Takeshi Iori, who had used the Perfect Gundam. The Gundam Amazing Red Warrior can exhibit overwhelming speed during battle due to its greatly improved thrust, and has high maneuverability thanks to the flexibly mounted vernier units above the shoulder armors. The weapon mounted on the left side of the backpack can be changed to meet the needs of different battle, and this allows the suit to be highly adaptable. The combination of the Gunpla's high degree of completion and the Meijin's excellent piloting skills caused the Gundam Amazing Red Warrior to be a formidable foe for any opponent.

Mounted on the head, the pair of shell firing weapons have high rate of fire but little power. They can however damage lightly armored areas such as the sensors and are ideal for intercepting incoming missiles or enemy units at close range.

Fixed onto the right forearm, it usually emits a short beam blade but by increasing the output, the beam blade's length can be increased.

Mounted on the left forearm, this shield is small to keep the suit’s weight down. Despite its small size, it can still serve as an effective defensive equipment due to the Meijin's high piloting skills. A pair of Vulcan guns is mounted on the underside of the shield.

A pair of shell firing weapons identical in functions and abilities as those found on the head are mounted on the underside of the shield.

A large rocket launcher with an extendable barrel, it is stored on the right side of the backpack, and is positioned under the right shoulder when deployed. The hyper bazooka can be fired with or without its grip being held. By replacing the ammunition, it can be changed into a beam bazooka. However, this must be done before the battle.

Can be stored on the left side of the backpack when equipped, the handgun has low firepower but is capable of rapid fire. Due to the handgun’s small size, it can be wielded easily during battle. A short or long blade can be attached to the bottom to turn the handgun into the Gunblade (Short/Long).

An optional handheld weapon, it is a short and small rifle, and can transform into the Beam Rifle Ko or Beam Gatling by attaching additional parts.

One of two optional beam rifles that the suit can use, beam rifle ko has better sensor functions. Formed the front section of the Long Rifle when combined with beam rifle otsu.

The beam gatling has a high rate of fire but low precision. A concentrated burst from this weapon can deal serious damage. The weapon’s firepower and shooting range increase after it combines with the beam rifle otsu. This combined form can be stored on the left side of the backpack, and is held under the left arm when in use.

The other optional beam rifle, it can be stored on the left side of the backpack if the Amazing Red Warrior did not carry the gunblade (short/long). When combined with beam rifle ko, beam rifle otsu serves as the rear section of the Long Rifle.

A long beam rifle formed from the combination of beam rifle ko and beam rifle otsu, it has higher firepower and shooting range than either rifle individually. It can be stored on the left side of the backpack and is held under the left arm when in use.

For this suit's history, please go to Meijin Kawaguchi's page. 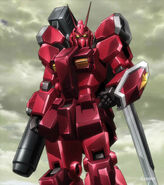 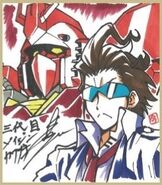