The PEN-01M Momokapool (モモカプル, Momokapuru?) is a Gunpla that appears in the Gundam Build Divers series. Based on the AMX-109 Kapool, it is built and piloted by Momo.

A Kapool-based Gunpla used by Momo, and assembled by her with advice from Koichi Nanase, but she rejected custom plans that are not cute.[1][2][3] The kit's custom style focused not on firepower or mobility, but solely on "Kawaii Power".[2]

It has been customized with a cute penguin motif, and contains a mini Kapool, the Petitkapool, making it more adorable.[1][2] The Kapool's missile launchers have been removed because they weren't so cute, and the unpleasant sharp tips of its iron nails have been rounded off, reducing its attack power.[1] However, its speed and strength/durability have both been greatly improved as a side effect of pursuing ultimate cuteness.[1][2]

Like its base Gunpla, the Momokapool can transform into a cruising form by retracting its arms and lowering its head, but Momo gave it a more literal name, 'Ball Mode', based on its appearance.[2] The Ball Mode boasts improved cruising capabilities, and can be used for dodging as well as other various ways, including using itself as a kinetic weapon as seen with its 'Rolling Attack'.[2][3] Since the Momokapool is incapable of flight, it needs help from its teammates, such as riding on top of the RX-零 RX-Zeromaru's Armed Armor Hattori, when aerial travel or combat is necessary.[4][5]

Two years later, Momo is seen using a Momokapool with a color scheme of black, white and pink.[6][7] Although the full details of this Gunpla is unclear, it seems to retain the Ball Mode, the Petitkapool, and has the same inability to fly.[6][7] It is known to have a weapon called the Hyper Belly Beam and a unique data-gathering feature, the "Penguin Research".[6][7]

Momokapool's version of the original Kapool's Iron Nails. Although their rounded tips caused a reduction in offensive capabilities, the destructive power of a wing slap from penguins, which the kit was based on, were more powerful than imagined, and it is obvious that this Gunpla has similar power.[2]

Beams can be shot from a total of ten claws on both hands. They were based on Koichi's advice that it is better to have basic shooting weapons.[2]

The Sonic Blast of the base Gunpla was renamed to an extremely straightforward "Belly Beam".[2] Despite its cute name, its destructive power is far from it, being capable of obliterating enemy Gunpla in one shot.[2][3]

A weapon of the black, white and pink version of the Momokapool.[6] It is mounted in the same location as the original Momokapool's Belly Beam, replacing it.[6] The Hyper Bell Beam fires a scattered beam with a wide radius.[6]

A small green gunpla, it is stored inside the Momokapool with its arms and legs retracted, resembling a ball.[2][3] Momoka came up with this gimmick after seeing boxes within boxes.[2] The Petitkapool pops out when the Momokapool's head opens, and can be used as an escape pod or as a Petit Mobile Suit for movement purposes.[2][3] It can also be used to scratch enemy Gunpla during combat.[3] Once the Petitkapool is ejected, the Momokapool turns inactive as Momoka's control is transferred to the small Gunpla.[3] The Momokapool can be reactivated when the Petitkapool returns into its body.[3] The black, white and pink version of Momokapool that appears later have a white and black colored Petitkapool hidden in its body.[7]

Used by the black, white and pink version of Momokapool during the battle against Alus' One-Eyes forces that were invading GBN.[7] The Gunpla's eyes emits a yellow scanning beam, gathering various data on the opponent's machines.[7] The data can then be shared with allied units.[7]

In Ball Mode, where Momokapool retracts its arms and lowers its head, it can use its feet in a buzzsaw-like fashion by spinning rapidly.[2][3] However, as the feet are sticking out, the Gunpla can end up tripping on ground protrusions.[3]

A combination special move with the GN-0000DVR/S Gundam 00 Sky. The Momokapool ejects its Petitkapool, and the 00 Sky kicks it like a soccer ball towards the enemy using the leg-mounted triangular device after activating Trans-Am Infinity. The power of the kick combined with the propulsion power of the Petitkapool results in a powerful attack that overwhelmed even the tough armor of the Super Shock Gundam, which is five times stronger than a usual Gunpla's. This special move also caused Petitkapool to land some distance away from the immediate battlefield, which can be an advantage or disadvantage depending on the situations.[8]

The Momokapool was designed by Momoka to fulfil the condition given by Koichi Nanase for him to join the force, Build Divers, set up by herself, Riku Mikami and Yukio Hidaka. Having piloted Koichi's Kapool prior to this, Momoka designed a Gunpla based on it and customized it with a cute penguin motif. Koichi was surprised when he saw the plans for Momokapool, and suggested that she scratch build it and offered to help.[3] The Gunpla proved its worth in its first battle, vanquishing an MS-11 Act Zaku in a one-on-one fight.[3]

Petitkapool emerges from the water (Ep 24) 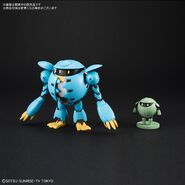 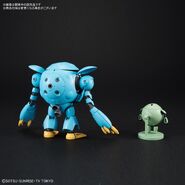 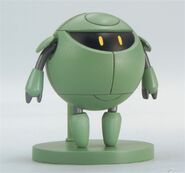 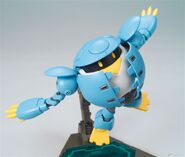 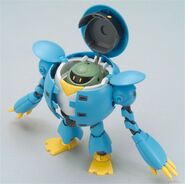