Oxner Cliff Aide of the Federation prime minister. He was a part of General Revil's staff during the One Year War. He is a strong candidate to become the next prime minister. 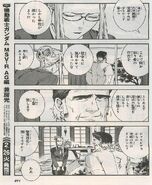 Retrieved from "https://gundam.fandom.com/wiki/Oxner_Cliff?oldid=349694"
Community content is available under CC-BY-SA unless otherwise noted.