The ovv-f Gafran is a Vagan mobile suit from Mobile Suit Gundam AGE.

The Gafran is the first mainstay mass production mobile suit used by the Vagan, and can transform into an alternate "dragon-like" flight mode for long distance travel in space. Besides having excellent mobility, its offensive and defensive power are also superior to that of the RGE-B790 Genoace.[1] Prior to the appearance of the AGE-1 Gundam AGE-1 Normal, it was thought to be invincible.[1]

Its waist-mounted, movable, stabilizer wings utilize lightwave propulsion system.[2] When encountering something new, the Gafran can scan and collect the object's data using a red light from its slit-like main sensor on its head.[3] To prevent the Earth Federation military from gathering technology and information from fallen or captured units, Vagan machines are installed with a self-destruct mechanism.[4][5] By A.G. 164, this function is removed from most Vagan MS.[6]

The Gafran is armed with a pair of hand-mounted beam vulcans/beam sabers, a chest-mounted diffuse beam cannon, and a tail-mounted beam rifle. It can also carry a handheld Colony Destroyer for destroying large object such as a space colony. The commander's version of the Gafran has a purple color scheme.[3]

A beam weaponry housed in the tail, it is usable in both MS mode and flight mode. In MS mode, it can be held over or under the shoulder when used. It has higher firepower than the beam vulcans and can destroy most mobile suit with one shot.

Mounted in both hands, the beam vulcans are the standard ranged weapon for most Vagan mobile suits. These beam weapons have a high rate of fire and are moderately powerful, capable of destroying small vehicles, buildings, and even mobile suits. However, they were not powerful enough to damage the AGE-1 Gundam AGE-1 Normal. In addition to being a ranged weapon, the beam vulcans can also generate a beam saber each for close range combat, allowing Vagan mobile suits to switch quickly from ranged combat to close range combat. The beam sabers can easily cut through most mobile suits.

Mounted in the torso. It fires a very wide beam and is mainly used for attacking enemies that stand before the Gafran. Although more powerful than the beam vulcans, it was still not enough to damage the AGE-1 Gundam AGE-1 Normal.

The first mass production unit of the Vagan, which suddenly appeared in A.G. 101, spreading destruction across the world. For 14 years, the Gafran was undefeated in combat until the battle in the Space Colony Nora in A.G. 115, where one Gafran was defeated by the AGE-1 Gundam AGE-1 Normal. The Gafran slowly lost its reputation for being undefeated over the years due to advancements in weaponry used by the Earth Federation.

By the A.G. 140s, the need for long-distance travel was waning due to the expanding sphere of influence of the Vagan, thus transformable mechanisms are omitted in later MS models.[7] However, the Vagan still deployed Gafran units despite being the presence of newer mobile suits like the ovm-e Dorado. Even in A.G. 164, the outdated Gafran is still deployed by the Vagan during their assault on Earth. Some Gafrans can also be seen during the battle of Rostroulan. 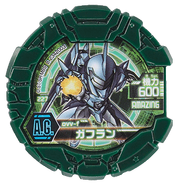 From Mobile Suit Gundam Extreme VS