The ovv-af Danazine is a mass-produced Vagan mobile suit appearing in the Kio Arc of Mobile Suit Gundam AGE.

The Danazine is the Vagan's next generation mass-production mobile suit, intended to replace the older frontline mobile suits, such as the ovm-e Dorado. It is the primary mobile suit used by the Vagan during the invasion of Earth.[1] During high-speed flight mode, the Danazine's legs are retracted, while the left and right head stabilizers closed and cover the Danazine's face to reduce aerial resistance. This mode allows the Danazine to achieve flight speed faster than most other mobile suits.[2] It is armed with a beam cannon built into its pelvis, two beam vulcans/sabers on each hand and a beam shooter/saber mounted under its chin.[3]

Mounted in the pelvis, it fires a very wide beam and is mainly used for bombardment.

Mounted under the chin, it is a special beam gun that can also emit a beam saber.

The tail of the Danazine, which functions as a striking weapon capable of impaling an enemy mobile suit.

In A.G. 164, the Danazine has become the Vagan's main mass-production mobile suit, replacing the older ovm-e Dorado. These units are deployed to the frontlines, acting as vanguards during the Vagan assault on Earth. 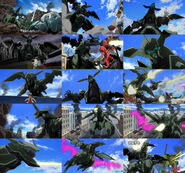 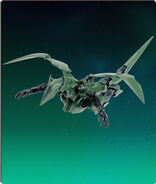