Like the ovv-af Danazine and ovm-lce Reganner, the Glud is developed for use on Earth but it is produce much later than them and only make it in time to participate in the final battle in space. It is a commander use, anti-stronghold, heavy mobile suit that is equipped with heavy weaponry and mounts large thrusters all over its body to compensate for its weight. It is also a rare Earth-use Vagan mobile suit that still maintains a humanoid shape, and this is done to maintain the soldier's morale. In terms of weaponry, it is armed with beam vulcans/beam sabers on each hands, a beam cannon built into its tail, a chest-mounted beam buster and missile launchers on its legs and booster packs that fire homing missiles based on the technology of the X-Rounder-use "Bit" weaponry. Also, because it is humanoid, it can use the armaments of the Khronos and Zeydra without modification.

A small beam gun built into each palm, it has a high rate of fire and is capable of destroying mobile suits. This is a common weapon for Vagan MS, and a beam saber can be emitted from the gun's muzzle for close combat.

Mounted in the legs and rear booster packs, the "missiles" fired from these launchers are not physical projectiles, but a beam weapon based on the technology of the X-Rounder-use "Bit" weaponry and they can automatically track their target.

A handheld five-barrel beam gatling gun originally developed for the Khronos. It boasts a high rate of fire and can also emit a beam saber from its muzzle for close combat. Used by Belka's machine.

A handheld beam rifle-like weapon originally developed for the Zeydra, it has a high rate of fire, but a short range. It can also emit a beam saber from its muzzle for close combat. Used by Ian's machine.

The Glud saw combat during the final battle of La Gramis. During this battle, Vagan’s battle plan actually has 2 phases. The 1st phase involves securing a path to Earth and the 2nd phase is another round of Earth invasion. The Glud was supposed to be deployed in the 2nd phase but as the plan never get out of phase 1, the landing forces were ordered to deploy near the end of the battle. 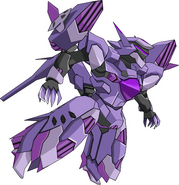