The ovm-e Dorado is a Vagan mobile suit from the Mobile Suit Gundam AGE anime series.

The ovm-e Dorado is the mass production successor of the ovv-f Gafran.[1] As it was designed for a different operating condition, the Dorado does not possess a flight mode for long-distance travel like the Gafran, instead, it has heightened mobility for use under gravity.[2] There are customized commander units with their basic performance and weaponry slightly different than the regular type.[2]

In terms of armaments, the Dorado is highly similar to the Gafran and possesses a pair of hand-mounted beam vulcan/sabers, a chest-mounted diffuse beam cannon, and a tail-mounted beam rifle. For defense, the Dorado features electromagnetic armor on its arms for blocking beam weapons. Overall, the Dorado is a superior unit to the Federation's RGE-B890 Genoace II and RGE-C350 Shaldoll Custom.

Housed in the Dorado's tail, it can be held over or under the right shoulder when in use. It is a powerful ranged weaponry that can destroy a mobile suit with one shot.

Mounted in the chest. It fires a very wide beam and is mainly used for attacking enemies that stand before the Dorado.

An optional forearm-mounted weapon that is similar in design to a shield, it is armed with three built-in beam vulcans.[3]

An optional forearm-mounted weapon with similar design to the triple beam vulcan, but it has three built-in missile launchers instead.

The ovm-e Dorado was a Vagan mobile suit in full mass production by the year A.G. 140, replacing the older ovv-f Gafran and ovv-a Baqto. It was introduced during the second phase of Operation Eden, and participated in a mission to draw out the AGE-1 Gundam AGE-1 Normal.

The Dorado performed well against the less advanced mobile suits of the Earth Federation such as the RGE-C350 Shaldoll Custom and RGE-B890 Genoace II, and was used throughout the following conflict as the Vagan's frontline unit. Even in A.G. 164, the Dorado was still used by the Vagan during their assault on Earth, despite the presence of the more advanced ovv-af Danazine.

Two Dorados and a Dorado L

One of the Dorados firing Beam Rifle 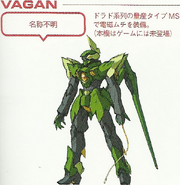