Orga is one of three artificially enhanced soldiers assigned to operate one of the Earth Alliance's newest Gundam mobile suits, the GAT-X131 Calamity Gundam. Like his comrades, Orga is a 'First Generation' Biological CPU, and is classified as a "Boosted Man", and all his personal data has been erased from the military's records.

Although he is effectively the leader of the Biological CPU trio, Orga's tactics are reckless and aggressive, and he often comes close to hitting his teammates with the heavy armaments of his Calamity (sometimes even showing intent). Between missions, he usually passes the time reading paperback novels and often smiles as he does so. His personality shows both childish and mature sides; he refers to the Battle of Orb as a game, but at another point restrains his frenzied comrades by reminding them of their orders. As a leader of the trio, Orga also give the order to his comrade for battle or retreat.

Orga fights with impressive use of heavy weapons, showing little to no concern that his comrades are often in the line of fire. This suggests he either trusts in their abilities and/or just simply doesn't care about them. His piloting skills are impressive; notably, he avoided the METEOR system for some time before Athrun cut him down, a feat few other pilots are able to match even in C.E. 73.

It should be noted that as a Biological CPU, Orga received regular doses of Gamma Glipheptin, a chemical designed to enhance a pilot's capabilities such as their stamina or reaction speed. Failure to regularly take the drug results in painful withdrawal symptoms which leave Orga barely functional.

Although little background information is given about Orga, it can be guessed that he lived a life similar to most Biological CPUs. Sometime during the Cosmic Era, he somehow became an orphan, likely because of the war. He would have then been taken to a Biological CPU research facility (possibly Lodonia, since it was the where Clotho Buer was trained, and it is the only known location where Biological CPUs were created), where he would have been trained with common fighting abilities in his time there.

During the first invasion of Orb, Orga destroyed dozens of MBF-M1 Astrays and engaged Mu La Flaga in the GAT-X105+AQM/E-X01 Aile Strike Gundam (The GAT-X105+AQM/E-YM1 Perfect Strike Gundam in the HD Remaster) and the three Astray test pilots. After seeing the aerial battle between Shani and Clotho against Kira Yamato and Athrun Zala's ZGMF-X10A Freedom Gundam and ZGMF-X09A Justice Gundam respectively, Orga joins the battle, but the trio begin firing at each other before suffering withdrawals from their medication and were forced to retreat.

In response for their failure, Muruta Azrael punishes the three by withholding their medications to "encourage" them for the next skirmish. The next battle does not fare any better as the three are stalled long enough until they run out of power. In the third battle, Orb's forces finally cave to the overwhelming numbers of the Alliance and withdraw to their Kaguya Mass Driver. During the battle, Orga and his comrades attempt to chase down the departing Kusanagi but are warded off by Kira and Athrun while the Mass Driver is self-detonated by Orb's leaders.

After the empty victory at Orb, Orga and his team are dispatched to ZAFT's Victoria Base and take the facility with ease. The group then go to space where they are assigned to the Dominion to hunt down the rogue Archangel. The Alliance forces come close during the battle at Mendel Colony as the accompanying Kusanagi was stalled by suspension cables from the debris. Though Orga and his companions retreat, the group acquire Flay Allster's escape shuttle, and she passes secret data containing the schematics for the Neutron Jammer Canceller.

Having been given both the technology and the excuse to use nuclear weapons once more, Azrael sends Orga, Shani and Clotho to protect the nuclear missile-equipped TS-MA2 Moebius units as they close in on the Boaz asteroid, which is then quickly vaporized by the missiles. When the Alliance forces move to target the PLANT colonies, members of the Three Ships Alliance intervene during the battle between the Alliance and ZAFT.

All hell breaks loose as Patrick Zala unveils the nuclear weapon GENESIS and wipes out a majority of the Alliance's fleet in a few seconds. Now determined even more to destroy the enemy, Orga's team is dispatched once more to protect the nuclear missile-equipped Moebius units, but the launched missiles are destroyed by the forces of the Three Ships Alliance. Orga is killed when the Calamity is sliced from behind by the beam blade of the Justice's METEOR. 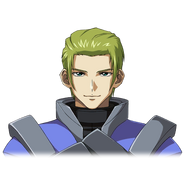