Orga Itsuka (オルガ・イツカ, Orga Itsuka?) is a character that appears in the Mobile Suit Gundam IRON-BLOODED ORPHANS television series. He was the leader of Tekkadan and former leader of CGS's Third Army Division; disposable child soldiers of the CGS.

He cared deeply for his comrades, considering them all to be a family rather than a group of mercenaries. When the Tekkadan expanded, he forbade the newcomers from receiving the Alaya-Vijnana implants, refusing to let his comrades bet their lives for power with the dangerous procedure. He was particularly close to Mikazuki, dating back to their childhood. Their brotherly bond became even stronger than any of the other members. He was ruthless to those he deemed to be an enemy, not afraid to shoot someone in cold blood when it came down to it, or, more often than not, ordered Mikazuki to do it.

He had undergone the Alaya-Vijnana System surgery, and was therefore better than the average pilot. His greatest strength, however, was not his ability to fight, but to lead. His personal charisma, along with his military genius kept Tekkadan moving forward. His ability to think outside of the box had saved him and his allies on multiple occasions, and that had earned him the respect of both friend and foe.

Despite having a rough childhood and never attending school, he was surprisingly fully capable of reading and writing, and more impressively, in two languages, unlike most children of his circumstances. He loathed sitting at a desk and doing paperwork, but was very capable of doing so when required.

Orga and Mikazuki joined CGS at the same time, receiving the Alaya-Vijnana surgery without anesthesia. Orga was punched for not crying during the procedure, though he reminisces that he would have been punched for crying anyway.

Fed up with the abuse he and his comrades receive from the First Army Division, Orga leads a mutiny that expels the majority of said group. He then renames the division Tekkadan and promises to complete the CGS original mission of escorting Kudelia Aina Bernstein to Earth.

After the battle with Arianrhod Fleet, Tekkadan retreated back to Mars. As Orga and the other members are formulating a plan to ensure Tekkadan's survival by going to Earth to fake their identity register, their base is surrounded by a massive battalion of Gjallarhorn Mobile Suits. McGillis launched in Gundam Bael to distract the enemy, while Orga, Chad Chadan and Ride Mass sneaked out of the base in a car to Admoss Company. There, they received news that Azee Gurumin and Eco Turbine are willing to take them to Earth, and Takaki Uno, who is on Earth, is ready to help them manipulate the register. As they walked out of the office, a car stopped nearby and three hitmen inside the car showered them with gunfire. Protecting Ride, Orga took a number of shots to his back, but despite his injuries, he managed to return fire and shot one of the hitmen with the handgun he borrowed from Mikazuki. Bleeding profusely, he tries to walk it off while remarking about Tekkadan's future and as he got weaker from the massive blood loss, he fell to the ground dead. His death was later reported to the rest of Tekkadan by Ride.

He and Orga have known each other from a very young age. They have an incredible loyalty to each other, each motivating the other to reach their full potential. Mikazuki obeys without question any order or plan Orga issues. Their deep trust allows them to cover each others' backs and is their greatest strength. Mikazuki's loyalty and protectiveness for Orga are so strong that he is willing to sacrifice his body and potentially his life to see Orga's goal through. Sometimes, Orga feels like he cannot let Mikazuki's expectations down because he can see it in his eyes every time he looks at him. Even when he was depressed over Biscuit's death, Mikazuki was able to drive him back up, promising to fulfill their dream of finding their place.

During the battle against the mobile armor Hashmal, Mikazuki disagrees with Orga's plan to launch in his STH-16/tc2 Orga's Shiden‎‎ so as to not take even the slightest chance of letting harm come to Orga. When Orga shows concern that Mikazuki may lose his life or use of more limbs due to the Alaya-Vijnana System, Mikazuki claims that his life was given to him by Orga, and that he needs to use his all for Orga.

They know each other from childhood and Biscuit serves him like a staff officer. Orga trusts and respects this is evident from the fact that whenever Orga wants to make a big strategic or policy decision for the future, he discusses it with Biscuit first before announcing it to the rest of Tekkadan. Additionally, Orga mentioned that despite having reservations, Biscuit never protested whenever Orga proposed something reckless throughout the years. However, Biscuit argued that he did, but eventually only forced to go along with it, as Orga was so passionate that he wouldn't listen. Biscuit's death caused Orga severe self-doubt, but he soon recovered with help from Mikazuki. After that, Biscuit's death became the rallying point for Tekkadan to finish their mission on Earth.

They would know each other from working in the CGS Third Group together, with Orga leading the group as a whole while Akihiro lead the Human Debris within the group. Despite Akihiro's misgivings, Orga treated him as a human being, frequently reinforcing the fact that he did not see Akihiro's background as a reason for him to be less than human when Tekkadan was founded on the principle of taking control of their own future. This would earn Akihiro's loyalty and respect. In Akihiro's own words, Orga gave him and the others purpose when they were but walking corpses.

Ride looked up to Orga immensely. He would design Tekkadan's emblem upon Orga's request. He managed to surprise Orga by saving sweets and snacks for the younger boys, getting embarrassed when Orga tussled his hair in amusement. Ride became distraught when Orga used his own body to shield him during the attack by Nobliss' men. Eventually, Ride avenged Orga's death and assassinated Nobliss Gordon using Mikazuki's gun, the weapon Orga had in his possession at the time of his death.

Merribit first saw Orga and his comrades when they were celebrating at Pub Someday, she was told by a bartender that they were a "rowdy bunch from Mars". While they were out eating and drinking to celebrate their success, Orga encouraged them not to hesitate to enjoy themselves. When Orga made a toast and proclaimed that they would party all night, Merribit smiled. However, it soon turned out Orga could not handle his alcohol and Merribit saw Mikazuki holding him while he coughed. She kindly offered Orga a handkerchief and told him that if he wanted to be an adult, he had to learn how to deal with many things, Orga accepted her gift although he said "it smells like a woman".[1]

Sometime afterwards, Naze Turbine told Orga that there would be an overseer from Teiwaz on the Isabiri from then on, Orga was surprised to learn the Overseer was a "she". When she entered, Orga had forgotten about their first encounter but Merribit had not, but he did quickly and eventually recover his very faint memory of what happened when he was drunk. She find it hard to believe that the ship was run by children, Orga requested that she not treat them as such.

Merribit frequently disagreed with the tactics employed by Orga. She was distraught at the vengeful tendencies the children in Tekkadan were showing after Biscuit's death, even more so at their willingness to engage in suicidal tactics during the battle of Edmonton. Despite this, she acknowledged that everything Orga was doing was for their collective future and that their lives weighed heavily on him. She has continued to work for Tekkadan since.

Naze is Orga's mentor and his initial partner in Teiwaz. Orga calls him "big brother" and he has a deep affection and an unconditional trust in Naze. For his part, Naze believes in Orga skills and always encourages him. He treats Orga with utmost care, to the extent that he declined his help and actually asked him not to intervene when he was framed. After Naze's death, Orga attempts to control his lust for vengeance against Jasley Donomikols, but eventually gives in when his fellow Tekkadan members push to take on Jasley's forces to avenge the deaths of Naze and other Turbines' crew.

Whilst initially enemies, McGillis later forms an alliance with Tekkadan and promises that the organization would become sovereign of mars once he succeeds in becoming Gjallarhorn's leader. Orga at first is a bit wary of the trust he can place in McGillis but as events progress and the growing conflict with Rustal's forces, Orga begins placing more faith in him and vows that he will never betray McGillis. McGillis on the other hand whilst respecting Tekkadan's fighting spirit seems to look down upon them as a means to an end. During the battle against Hashmal, he claims he wants Tekkadan to be completely reliant on him rather than a symbiotic relationship. This is further shown by McGillis' willingness to let Tekkadan take casualties, this infuriates Orga and prompts him to assault McGillis for daring to undermine the lives of his family. The strain on their alliance borders on a breaking point with Orga dropping all pretense between the two and claiming that after the battle with Rustal's forces they would go their separate ways.

Orga with other CGS soldiers during lunchtime. 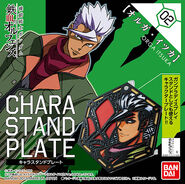