Upon receiving intelligence of the Principality of Zeon's development of a new class of weapon called the mobile weapons, the Earth Federation government initially dismissed the significance of such inventions. Although Federation intelligence agents even managed to acquire the design blueprints of Zeon mobile suit programs, requests to start Federation's own mobile suit research was rejected. The Federation military officials, anticipating a full-scale conventional line of battle warfare, decided to concentrate on strengthening its space armada, and believed that war would never break out because any potential Zeon hostility would be deterred in front of an overwhelmingly superior Earth Federation Space Forces fleet.

After suffering heavy defeats in the hands of Zeon Zakus in the early phase of the One Year War, the Earth Federation finally learned its bitter lesson of ignorance in the hard way. A top-secret military project, codenamed "Operation V" (short for "Operation Victory") was initiated, while at the same time the EFSF fleet was being rebuilt in Jaburo under Vinson Plan. Using technology information captured by Federal agents within Zeon (e.g. the design details of AMBAC system), and taking advantages of its own technology and manufacturing superiority, the Federation began to develop a series of more versatile and powerful mobile suits.

Operation V was finally discovered by Zeon forces on September 18, U.C.0079, when the carrier White Base was followed by a Musai-class cruiser on its way to pick up the prototype mobile suits from the research facility in Side 7. The Musai's commander, Char Aznable, sent out a reconnaissance squad to infiltrate the colony and investigate the rumored Operation V, which Zeon previously obtained traces of intelligence. One of the squad member decided to violate orders and started attacking the dock, destroying multiple Federal prototype modules and killing most of the Federation crews in the process. In the ensuing chaos, a desperate civilian Amuro Ray (Tem's son) managed to start up the RX-78-2 Gundam and destroyed the two Zakus attacking the colony (at the cost of blowing a large hole in the colony's hull), marking the first recorded battle between mobile suits. Although a significant proportion of Operation V's research data was lost due to the missing of Tem Ray and death of the senior crews, the result of Operation V was proven — the Gundam's performance was overwhelmingly superior to any Zeon mobile suits until the introduction of MS-14 Gelgoog at the final weeks of the war.

Each of the three mobile suit models, although all prototypes, saw intense action throughout the war. After witnessing their success, the Federation created several mass-produced versions of each prototype.

Design was used for the RGM-79 GM, and the limited-produced RX-79[G] Gundam Ground Type.

Design was used for the RX-77D Guncannon Mass Production Type.

Design was used for the RX-75 Guntank Mass Production Type.

Differences between Prototypes and Mass-Production Type

The main differences of the prototype models from their mass-produced counterparts are the following:

Despite the intention for Mass Production, the models made from the RX-75 Guntank and RX-77 Guncannon would only be produced in limited numbers, while the RGM-79 GM would go on to become the mainstay of the Federation Mobile Suit forces for years to follow. The RX-79[G] Gundam Ground Type was only produced in limited numbers, due to being the product of surplus parts for the original RX-78 Gundam. 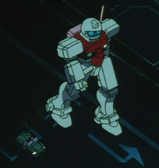 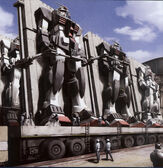