The Gundam Wiki
Register
Don't have an account?
Sign In
Advertisement
in: Conflicts, Cosmic Era Conflicts, Conflicts of the Second Alliance-PLANT War

Operation Fury (Second Battle of Orb) (オペレーション・フューリー) was a battle that took place during the Second Alliance-PLANT War.

Following the rampage of the GFAS-X1 Destroy Gundam at Berlin, PLANT Supreme Councilor, Gilbert Durandal formally revealed the existence of Logos, an anti-Coordinator extremist group responsible on the attack of their more moderate allies. A worldwide manhunt ensued for Logos' leadership, with civilian mobs and even members of the Alliance's military, such as the Republic of East Asia, aiding ZAFT. This culminated in Logos' failed stand at Heaven's Base, which saw all leading figures, with the exception of Lord Djibril, captured. Djibril was able to escape as soon as he knew the battle was lost, and fled to Yuna Roma Seiran, who was in a position close to the military commander-in-chief.[1]

After learning that Djibril had taken refuge in Orb, ZAFT demanded that he be handed over, but Yuna made the fatal decision of denying Djibril's presence in spite of photographic evidence of the two and ordered ZAFT to withdraw its troops. ZAFT instead chose to amass its forces and prepare for a large scale invasion.[2]

Beneath the politics of both sides, however, stood the rogue Archangel, which had been sheltering Cagalli Yula Athha and had barely survived Operation Angel Down. Athrun Zala, who had been framed for treason, would inform them that Durandal seemed to have an ulterior motive, and it is likely that the commitment of military resources far beyond necessity implied that he wished to destroy Orb as he saw it as a future obstacle.[2] Before departing for battle, Captain Murrue Ramius had the captured Neo Roanoke released and gave him an FX-550 Skygrasper for his travels.

While Orb had scrambled whatever mobile suits, tanks, or ships it had, ZAFT's wider array of mobile suits, alongside numerical superiority, allowed them to breeze through the defenders. One of their first targets was the Seiran Estate, causing the Seiran family (save for Yuna) to retreat to their underground shelter. However, the shelter was later destroyed by a UTA/TE-6P Geo-GOOhN, killing all of its occupants. The situation for Orb also worsened due to Yuna's incompetence as a commander as he failed to make adequate orders and attempted to divert accountability whenever he could. Seeing the desperate situation of her country, Cagalli was about to launch before being taken to a secret hangar from her father's time by both Ledonir Kisaka and Erica Simmons. In it was the ORB-01 Akatsuki Gundam, a symbol of her father's and their country's desire for true peace. With the Akatsuki, Cagalli and the Archangel's Murasame platoon departed to provide support for Orb's defense.[2]

Cagalli's arrival restored the morale of the troops, and she attempted to get into contact with the military HQ. As Yuna had falsely claimed that she was an impostor at the Battle of Dardanelles, Cagalli first tricked him into admitting she was the true person before ordering the military to arrest and interrogate him for Djibril's location.[2] With Cagalli back at the helm, Orb's forces were finally able to stand their ground and began to gradually push back ZAFT's forces. By this time, the Archangel also managed to enter the battlefield.

At that moment, the LHM-BB01 Minerva had arrived and sent out FAITH pilot, Shinn Asuka, with the ZGMF-X42S Destiny Gundam to engage the Akatsuki before the ship engaged with the Archangel once more. Shinn easily outmatched Cagalli, cutting off the Akatsuki's left forearm with a beam boomerang and cleaving through its shield with its beam sword. Before a final blow could be struck, Kira Yamato and his ZGMF-X20A Strike Freedom Gundam arrived from space and with Lacus Clyne and the ZGMF-X19A ∞ Justice Gundam in tow. Kira engaged Shinn in a dogfight as Cagalli would leave for Orb HQ to take formal command of the battle.[3]

As Shinn and Kira's battle raged on, the Destiny's power became dangerously low, and Shinn was forced to concede and withdrew back to the Minerva to recharge. At the same time, a descent pod carrying Lacus' three ZGMF-XX09T DOM Troopers also made planetfall and began to aid Orb's ground forces.[3] Despite thorough interrogation, Yuna would fail to disclose any relevant information, and Cagalli ordered him to be escorted outside to a shelter, though he would be killed when a ZGMF-2000 GOUF Ignited crashed into him. Cagalli then attempt a rollcall from the various shelters, but Djibril's entourage were able to eliminate the guards of Section 3's Seiran Shelter and falsely reported his absence. In their battle, the Archangel prevailed against the Minerva after the latter's "M10 "Isolde" 42cm Triple Cannon" were destroyed by Neo's Skygrasper, at the cost of him being forced to land in the Archangel after his wing was clipped. The Archangel then submerged outside the Minerva's attack range and shifted its focus towards hunting ZAFT's submarines and underwater mobile suits with impunity.

With his unit finally restored, Shinn departed for the second time, this time with Rey Za Burrel and his ZGMF-X666S Legend Gundam providing support against the Strike Freedom. Together, the pair were able to overpower Kira, but Athrun, despite still being severely injured, flew out in the ∞ Justice to rescue Kira. Initially, Athrun attempted to reason with Shinn to stop the attack on Orb, but Rey snapped Shinn back to reality and fired back at Athrun. As Kira engaged the Legend, Athrun prevented Shinn from attacking anyone further. Though Kira and Rey were evenly matched, Shinn activated Seed Mode and immediately knocked the ∞ Justice back with a stiff sword swing, but Athrun ultimately gained the edge by also entering Seed Mode and sliced off the Destiny's right hand. (In the manga, Gundam Seed Destiny: The Edge, Shinn would easily defeat Athrun, who wasn't able to fully utilize his unit due to his injuries) Amidst the chaos of the battle, however, Djibril's shuttle launched from the Seiran Shelter. Despite Orb sending out three Murasame, and ZAFT sending out Lunamaria Hawke in the ZGMF-X56S/α Force Impulse Gundam, neither party were able to destroy the shuttle as Djibril escaped. Concurrently, ZAFT's flagship, the St. Helens, was sunk by the Archangel.[4]

As Djibril had escaped and their flagship gone, Minerva captain, Talia Gladys took charge and ordered the full withdrawal of ZAFT's forces; asserting that their orders were only to capture Djibril, not engage the Orb forces.[4]

Following the battle, Cagalli returned to power as the head of Orb, following the deaths of Yuna and his father Unato Ema Seiran during the battle. She would make a formal announcement denouncing Durandal's excessive force in Orb. Her broadcast was interrupted by Durandal's Lacus Clyne impostor, Meer Campbell, who justified their actions given the extremity of Djibril's evils as well as Orb's refusal to hand such a man over being the direct cause of the battle to begin with. In response, Lacus personally arrived at Cagalli's side and interrupted Meer's broadcast, calling out Durandal for his duplicity and his ability to manipulate others while concealing his own ambitions. Through Lacus and Cagalli's message, Orb officially reverted back to its neutral stance as it had been in the previous war.[5]

Though coming out on the losing end of the battle of wits, Durandal had still successfully cornered Djibril in space, but the battle was still considered a large failure as Operation Fury had indirectly led to the restoration of Cagalli's power from the incompetent Seiran family, and she would be more hard-lined towards Orb's protection of its principals compared to her predecessor. Nonetheless, Orb would, however, be pacified and no longer interfered in his hunt for the last remaining Logos member.

Djibril, having escaped his pursuers, eventually reached the Daedalus Lunar Base and was able to fire the superweapon, Requiem, at the PLANT colonies, causing the deaths of millions of civilians as an act of defiance towards Durandal. 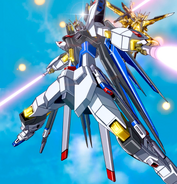