The Gundam Wiki
Register
Don't have an account?
Sign In
Advertisement
in: Conflicts, Universal Century Conflicts, Conflicts of the One Year War

Operation British was a failed military operation executed by the Principality of Zeon during the One Week Battle of the One Year War in U.C. 0079. The mission involved dropping a colony on the Earth Federation Forces' Jaburo base. The colony failed to hit its target, but its destruction still resulted in the deaths of billions of people. The incident was one of the key factors of the signing of the Antarctic Treaty.

Shortly after declaring war on the Earth Federation, the Zeon Armed Forces moved a depopulated colony off of Side 2 to drop it on the Federation's Jaburo base, which had withstood all attacks, even those of nuclear weapons.

The Federation managed to divert the colony from Jaburo, but it still plunged into Earth. The colony started to break up, but the massive central cylinder hit Sydney, Australia, causing a massive explosion that obliterated the city and a large portion of the continent around it.

Following the failure of Operation British, the Principality of Zeon attempted to repeat their actions by dropping a colony from Side 5. However, the Earth Federation Forces deployed their space fleet and engaged the Zeon forces in what became the Battle of Loum.

The colony impacting Sydney, as seen in Mobile Suit Gundam I

The colony about to enter Earth's atmosphere. 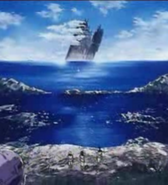