Omur Fang was originally a cadet in training much like Ryu Jose. He became an operator on board the White Base. He also was White Base's resident bomb expert and frequently helped out in the dock with the preparation of mobile suits. He was responsible for the death of captured Zeon soldier, Cozun Graham when he attempted to open a door with a bazooka. Although he played a minor role, he had a fair amount of appearances by the virtue of the fact that he was an operator and thus a member of the crew giving frequent reports. Despite this fact, a surprisingly large number of individuals played this role as well.

In U.C. 0095 Omur Fang is working at the newly-formed SNRI. He is the second person to talk to Kikka about Amuro, after hearing she came to Lhasa to interview Job John from Kai. 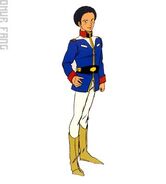