Engineering 1st Lt. Oliver May (オリヴァー・マイ, Oliver May?) is the protagonist of the OVA Mobile Suit Gundam MS IGLOO.

May is dedicated to his work as an engineer and mobile weapon evaluator and is honest about how he feels and thinks. He gets excited over the prospect of gathering data on new machines and thinking of what that data could do for the future of Zeon military development. He also tends to feel sadness over the prospect of test machines being created only to be cast aside.

During early 0079U.C. Engineering Lieutenant Oliver May was assigned to the Jotunheim as part of the 603 Technical Evaluation Unit. His duty was to collect data on new experimental machines by testing their practicality and combat effectiveness.

His first assignment is to set up the fusion plasma gun QCX-76A Jormungand. As the parts and supplies were being acquired from a Papua-class, Oliver may met the ship's captain Martin Prochnow and special forces officer Captain Monique Cadillac, both of whom Oliver would be working closely with. He also met with Gunnery Chief Aleksandro Hemme who was assigned to operate the Jormungand.

The Jormungand was set up during the Battle of Loum kilometers to the rear of Zeon's fleet where those involved believed that the plasma gun would be used to shoot down Federation ships at range. However as the Jormungand never received observational data for targeting Olver decided to take an observational boat out to the front to provide the targeting data. However before he could reach the Zeon fleet squadrons of mobile suits appeared, one of which was Char Aznable's personal suit which approached the boat and sent a message that those with the Jotunheim should just hang back and let the MS squads do the fighting. After the operation, it was with resignation and sadness that Oliver May wrote in his report that for reasons unknown the Jormungand had never been a part of the battle plan, though it did fire three shots one of which destroyed a Magellan-class battleship, and that the serpent of lore would never descend upon another battlefield.

The Howl that Dyed the Setting Sun

Oliver's second assignment was to go to test the YMT-05 Hildolfr mobile tank on Earth along with Monique Cadillac. Oliver was original quite excited at the prospect of proving the worth of a previously discarded design, however his superior decided to inform Oliver that the tests for the 'impending redeployment' was just a cover. The Zeon military was having more difficulty with the invasion of Earth than originally estimated and needed to deploy every mobile weapon they had. After the tests, the 603 Technical Evaluation Unit was to abandon the Hildolfr.

Shortly before the drop Oliver met with Major Demeziere Sonnen, the pilot for the Hildolfr. Oliver was also informed that the major had once been an accomplished artillery instructor but when he tested poorly as a mobile suit pilot while his students went on to become pilots he suffered a breakdown that he not fully recovered from. Sonnen and the Hildolfr were similar in that both were discarded as useless, but although it appeared that both had a chance to redeem themselves, Oliver knew the truth that no matter how the tests turned out, they would just be discarded again.

During the operation, the Komusai that Oliver was piloting came under attack from captured enemy mobile suits. Sonnen and the Hildolfr dropped early and engaged the enemy while Oliver and Monica coordinated data until they lost communications. Sonnen saved the two members of the 603 Technical Evaluation Unit at the cost of his own life, and although the Hildolfr was damaged, the black box was intact.

The next assignment for the 603 Technical Evaluation Unit to test was the new EMS-10 Zudah, a highly touted mobile suit that was part of a new propaganda campaign meant to intimidate the Federation and raise moral for the Zeon. The plan was mildly successful as the three test units were able to scare off a squadron of RB-79 Ball mobile pods without firing a single shot. When lieutenant Oliver reported the successful test flights of the Zudah, and when he was informed about the Federation's Operation Odessa he was confident that once it was put into mass production the Zudah would turn the tides back in Zeon's favor when the focus of the war shifted to space. However his superior informed Oliver of the truth about the Zudah, that what Oliver thought was an essentially new machine derived from the original EMS-04 Zudah was in fact the same mobile suit with some minor modifications. Shortly afterward in battle against a Salamis-class cruiser one of the test units over-exerted the engine causing it to overheat and the mobile suit to break apart. After this test the Jotunheim received a broadcast of the Federation's own propaganda which revealed that they knew about the Zudah and how the design was original bested by the MS-04 Prototype Zaku.

When Oliver confronted Zudah pilot Jean Luc Duvall about how the limit on the Zudah's engines could be the same as the original specs as those of the EMS-04, as well as how the Federation was aware of the truth of the Zudah, Duvall blamed politics and the Zeonic Company, maker of the Zaku and rival to the Zudah's own Zimmad Company.

After Operation Odessa the Jotunheim was one of the ships that responded to the distress of those who managed to escape back into space. The Zudahs sortied to protect the defenseless H.L.V.s and MS-06J Zaku II Ground Types that were stranded in orbit, and Duvall proved the worth of the "Ghost Fighter" Zudah by destroying 4 enemy RGM-79 GMs. Duvall goaded the GMs into following his machine as he pushed its acceleration to the max. He outpaced the GMs, which was considerable since they were amongst the fastest space mobile suits of the time, and their engines malfunctioned as the pilots pushed their machines too hard, allowing Monica in her own Zudah to pick them off from behind. However Duvall pushed his own machine too hard and it broke to pieces.

I Saw the Ocean Above The Jaburo's Skies

Oliver May's next assignment in early December of 0079 UC was to retrieve practicality data on the atmospheric reentry assault mobile suit MSM-07Di Ze'Gok after the Muspelheim and the 604 Technical Evaluation Unit, who were originally conducting the tests, were shot down. During this time he met the seaman Werner Holbein, the slightly crazy pilot of the Ze'Gok. Oliver pilots a Zudah along with Hideto to protect the crew of Jotunheim. Werner Holbein would die during the third test run after finally succeeding to destroy 5 Federation warships, but before that, he managed to gain the respect of Oliver May as well as other members of the Jotunheim's crew.

Go Beyond the Peak of Light

After the fall of Solomon, Zeon worked frantically to prepare for the coming Federation attack. As part of their preparations production of their own mobile pod, the MP-02A Oggo, was approved and assigned to the 603 Technical Evaluation Unit for testing. This was one assignment that Oliver May protested to because the Oggo had already been approved for mass-production, meaning that from the beginning Zeon's leaders were intending to send it into combat no matter what the results of the tests were.

After returning to the Jotunheim Lt Oliver May met with Colonel Herbert von Kuspen who was to take command of the operation. He also had a chance to speak with Captain Monique Cadillac's younger brother Erwin Cadillac, who was quite excited to speak with the man his sister often wrote about. Sadly that first talk would also be their last as Erwin was shot down during the Oggo's first actual flight near Granada.

Just before the Battle of A Baoa Qu the 603 Technical Evaluation Unit was given the MA-05Ad Big Rang, a mobile armor designed to resupply the Oggo during battle. Because of the Federation's sudden attack on A Baoa Qu Lt Oliver May, who was going through the machine's data in the cockpit, was forced to become the Big Rang's test pilot. Although the Big Rang was, in Oliver's opinion, too large and slow to be an effective combat unit, Oliver managed to use it to great effect destroying a number of enemy ships, mobile suits, and mobile pods, while managing to resupply several Oggo's (probably saving those machines from destruction.

However as the Jotunheim's forces were covering the Zeon fleet's retreat to Side 3 the Big Rang was destroyed, a fate shared by most of the machines tested by the 603 Technical Evaluation Unit. Miracously however Oliver May did not share the same fate as the other test pilots as he was retrieved alive and well by Monique Cadillac in her Zudah. After that battle Oliver stated that he now knew what it was like to be a test pilot.

In the manga Mobile Suit Gundam 0083 Rebellion, it was revealed that Oliver May fled to Axis after the war, where he continued to serve as an engineer. He accompanied the AMX-002 Neue Ziel to the Delaz Fleet in order to deliver it to Anavel Gato.

Oliver May as featured in Gundam Card Builder

Oliver May as featured in from Gundam War card game

Oliver May argues with Monique Cadillac

Oliver May in pilot suit and Big Rang 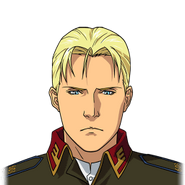 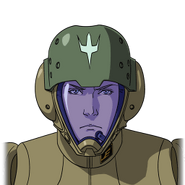 Oliver May as seen on Gundam 0083 Rebellion

Oliver May introduces the Neue Ziel to Anavel Gato, with Monique Cadillac and Hideto Washiya