Ogre (オーガ, Ōga?) is a character who appears in the Gundam Build Divers television series and its prologue. He is the builder and pilot of the GNX-803OG Ogre GN-X and the Gundam GP-Rase-Two.

Do-ji's big brother. Known as "Hellfire Ogre," this ever-stoic Diver will go to any lengths in his desire for strength. Ogre is always seeking powerful opponents, and continues fighting in order to become even stronger. Even the mightiest player of all, GBN's current champion Kyoya Kujo, is a target for his insatiable craving.[1]

An elite Diver. His Diver rank is SS.[2]

Ogre had defeated a trio of divers in a Force Battle, they later called him for a rematch. Ogre arrived at the agreed venue early and his brother, Do-ji, also came along to see him fight. Riku, Yukki and Sarah, beginners who Do-ji had tricked previously, then stumbled upon the siblings. Ogre assumed it was them who called him for a Force Battle, but this was soon cleared up when the real challengers arrived. Due to a misunderstanding, Riku and friends got dragged into the fight between Ogre's GNX-803OG Ogre GN-X and the three challengers' YMS-08B Dom Test Types. Riku eventually activated his GN-0000DVR Gundam 00 Diver and defeated the leader of the challengers jointly with Ogre. However, catching sight of Riku's skills, Ogre attacked him. The two ended up activating their Trans-Am Systems, but Riku's overloaded due to his Gunpla's poor build. Before Ogre could go for the kill, Sarah stepped in to protect Riku. Ogre then stopped and left with Do-ji.[3]

Ogre was a spectator at the 14th Gunpla Force Tournament Finals match between Avalon and the 7th Panzer Division. [4] Sometime later, Ogre and Do-ji saw the final portion of the recorded footage of the Build Divers' victory against the 7th Military Academy. Ogre then mused that Riku, now a member of the Build Divers, would not be a rookie forever.[5] Subsequently, he led his force, Hyakki into battle in a timed Mission, easily destroying their target in record time, but it left him hungry for more worthwhile battle.[2]

Upon learning that the randomly picked opponents for the upcoming Battle-Random mission was the Build Divers, Ogre rejected Nuts' suggestion of sending in their weaker members, as he assessed that Riku had gotten stronger. During the mission, Ogre and Rose paired up, but got separated due to the Build Divers' plan. He then encountered and ignored Koichi Nanase and his RMS-117G11 Galbaldy Rebake, charging ahead to find Riku and his GN-0000DVR/A Gundam 00 Diver Ace‎, who had defeated Do-ji and his xvt-mmc Geara Ghirarga. The two began to battle, and impressed with his strength, Ogre demanded Riku activate Trans-Am. To his shock, Riku refused, vowing to win without using the system. This piqued Ogre's interest in trying out Riku's fighting style.[2]

Riku put up a good fight, but Ogre eventually overwhelmed him. However, before he could finish Riku off, Do-ji activated his Break Decal and the Geara Ghirarga went berserk. Hurt and angry at Do-ji's betrayal, Ogre attacked his brother's Gunpla, but it was too strong, even with Riku's help. However, thanks to Riku's quick wit, they were able to damage the Gunpla and shut it down. Drained from all of this, Ogre withdrew his force, forfeiting the mission. Post-battle, Ogre let Riku knows that he want to fully experience his fighting style.[2]

Ogre and his force was invited by Emilia of Avalon to join in the Coalition of Volunteers, but he declined as his force is on self-imposed suspension due to Do-ji's actions. However, he suggested the Build Divers as replacement.[6] Sometime later, Ogre built a new Gunpla - the Gundam GP-Rase-Two.

When Ogre found out that Riku had withdrew from the Matching Battle, he searched for him using the Gundam GP-Rase-Two. Upon finding Riku and his GN-0000DVR/S Gundam 00 Sky, Ogre learnt that Riku had prioritized searching for Sarah. He then forced Riku to fight him as he wanted to know if Riku's strength was real, that he wasn't using Sarah like those who had used Break Decals. While Ogre was satisfied with Riku's strength and determination, the battle was inconclusive as Kyoya Kujo announced that the second Coalition of Volunteers had Sarah in its custody.[7]

During the force battle between the second Coalition of Volunteers and the Build Divers and its allies, Ogre and his GP-Rase-Two suddenly appeared and prevented Kyoya's AGE-IIMG-SV Gundam AGEII Magnum SV ver. from firing a fatal shot at the 00 Sky. It was then revealed that Ogre had applied for his force, Hyakki, to be allied with the Build Divers just before the start of the battle. As the GP-Rase-Two fought against the AGEII Magnum SV ver., Ogre explained he was helping the Build Divers as he wanted a true battle and could care less about saving the world. Despite his best effort, Ogre was no match for Kyoya and had to be saved by Riku. Ogre and Riku then jointly fought against Kyoya, and after a tough battle, managed to defeat the Champion using their respective finish moves. As the fight ended, the badly damaged GP-Rase-Two crashed onto the ground and Ogre cheered Riku on as the latter flew away to save Sarah.[8]

Ogre is the older brother of Do-ji. 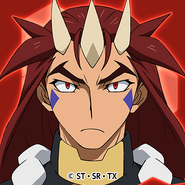 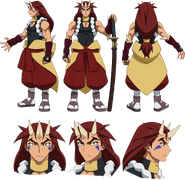