Odel Bernett (オデル・バーネット, Odel Bernett?) is a character from the manga New Mobile Report Gundam Wing Dual Story: G-Unit. He is the pilot of the OZX-GU02A Gundam Geminass 02, and later on the OZ-10VMSX Gundam Aesculapius.

A test pilot and the older Bernett brother, Odel is calm and collected and possesses a good intuition both in and out of battle. He is engaged to Tricia Farrell. Fighting in a level-headed style that contrasts with his younger brother, his piloting skills are impressive and is considered the ace among MO-V's defenders as he can fully utilize the PX System, but curiously he often finds himself on the losing end of fights. Still, he never loses his resolve to help MO-V survive, nor does he ever lose sight of his objectives.

After losing Geminass unit 02, he dons a mask and adopts the identity of "Silver Crown" to continue fighting from within OZ Prize as a double agent. He returns to MO-V after his cover is blown. Eventually he avenges the death of his parents, which is revealed to have been orchestrated by Dr. Berg in a shuttle accident. He aids Odin and Roche Nattono in the final battle and marries Tricia at the end of the series. 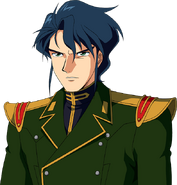 unmasked
Add a photo to this gallery
Retrieved from "https://gundam.fandom.com/wiki/Odel_Bernett?oldid=468002"
Community content is available under CC-BY-SA unless otherwise noted.