The OZX-GU02A Gundam Geminass 02 is a mobile suit that appears in the manga New Mobile Report Gundam Wing Dual Story: G-Unit. It is piloted by MO-V's Odel Bernett.

The development of the Geminass Unit 2 was mostly in parallel with the Unit 1. It was identical to its brother unit aside from its color scheme: since Geminass 02 was intended for space-use, it adopted a deep blue color scheme for reduced visibility in space. It was deployed for actual combat earlier than the Geminass 01, and since it was piloted by the more experienced Odel Bernett, it was able to activate the PX System earlier than its brother unit as well.[1]

The Gundam Geminass 02 is equipped with two beam swords stored in its backpack. The principle of these close combat weapons is energy being focused into a beam with a sword shape, and used to melt and cut through even the toughest armor

A basic arm-mounted defense armament for many mobile suits. The shield is a thick sheet of armor designed to take severe punishment that would normally destroy a mobile suit.

A prototype handheld weapon that can fire beams thanks to an internal particle accelerator. It is also fitted with an electromagnetic condenser that allows it to fire a charged "Hyper Shot".

The PX System takes advantage of the increased adrenaline a pilot feels during combat and also increases the performance of the mobile suit, but does have a time limit which, if exceeded, has serious consequences for both the pilot and the suit.

In AC 195, five teenaged boys use Gundam mobile suits to wage a guerilla war against OZ and their oppression of the space colonies. Far removed from this conflict, new Gundam type mobile suits are being secretly constructed at the mobile suit factory asteroid MO-V. Developed by Dr. Berg, the OZX-GU01A Gundam Geminass 01 and OZX-GU02A Gundam Geminass 02 represent a change in mobile design philosophy. The Geminass 02 is assigned to Odel Bernett, the older brother of rookie pilot Odin. Although Odel performs well and is able to use the PX system, his Geminass 02 is damaged in battle and captured by OZ Prize. The damaged Geminass 02 is remodeled by OZ Prize and re-designated as OZ-10VMSX Gundam Aesculapius. 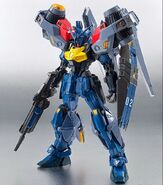 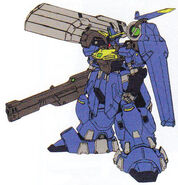 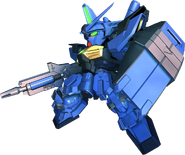 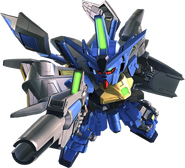