The OZX-GU01A Gundam Geminass 01 is a mobile suit that appears in the manga New Mobile Report Gundam Wing Dual Story: G-Unit. It is piloted by MO-V's Odin Bernett.

Designed by Dr. Berg and constructed by MO-V's Hermann Industry, the Geminass 01 was one of two "G-UNIT" all-purpose mobile suits secretly developed by MO-V. "G-UNIT" is a mobile suit concept, capable of adapting to various different battlefield situations by equipping various weapons and optional parts.[1] This is accomplished through the "linear-lock bolt" mechanism, an electromagnetically powered equipment switching system allowing the Geminass to rapidly swap out its arms, legs, and head, allowing it to switch to different loadouts (known as "units") depending on the environment and the type of engagement.[2]

Software-wise, the Geminass is equipped with the PX (Pilots Experience) System. This system reacts when the pilot's senses are sharpened, and increases the mobile suit's output to maximum level in response. When the system is active, reaction speed and mobility are greatly increased. However, activating the system places a great strain on the pilot, so a limiter was placed on the system. If the limiter is ignored, there is a risk of the mobile suit being destroyed.[1]

Even though its armor was made of Gundanium Alloy, and its appearance resembles the five Gundams sent to Earth as part of Operation Meteor, the Geminass is not related to them directly.[1] However, when its pilot Odin Bernett learned that Gundam pilots considered Gundams to be the symbol of freedom and defenders of the colonies, he renamed the Geminass 01 "Gundam Geminass".[3] On a side note, its model number originally began only with "X", but "OZ" was added after MO-V aligned itself with OZ.[1]

A close combat weapon that uses high-powered plasma beams contained within a magnetic barrier in the shape of a sword, its blade is wider than the standard beam saber. Two of these weapons are equipped on the backpack.[4]

A handheld shield made using Gundanium Alloy in a honeycomb structure. It is fitted with an electromagnetic field generator, making it effective against both solid shell and beam weapons. The accelerate rifle can be mounted inside the shield.[4]

A prototype beam weapon developed by OZ's quantum physics research lab. Thanks to a spiral particle accelerator, it fires beams of high-speed muon. It contains an internal electromagnetic condenser, allowing it to fire a charged "hyper shot".[4]

The PX System takes advantage of the increased adrenaline a pilot feels during combat and also increases the performance of the mobile suit but does have a time limit which, if exceeded, has serious consequences for both the pilot and the suit.

In AC 195, five teenaged boys use Gundam mobile suits to wage a guerrilla war against OZ and their oppression of the space colonies. Far removed from this conflict, new Gundam type mobile suits are being secretly constructed at the mobile suit factory asteroid MO-V. Developed by Dr. Berg, the OZX-GU01A Gundam Geminass 01 and OZX-GU02A Gundam Geminass 02 represents a change in mobile design philosophy. The Geminass 01 is assigned to rookie pilot Odin Bernett, who is at first unable to use the PX system but gains mastery of it over time. Later, the Geminass 01 is upgraded to the more powerful OZX-GU01LOB Gundam L.O. Booster and eventually passed over to former OZ Prize pilot Roche Nattono.

In Gundam EX A, Leos Alloy uses Gundam Geminass equipped with High Mobility Unit and engage in battle against Heero Yuy's XXXG-01W Wing Gundam to collect his combat data. However, Leos end up using the Geminass to shield the Wing Gundam from Extreme Gundam Carnage Phase's attack and has to dive out from the world of After Colony. 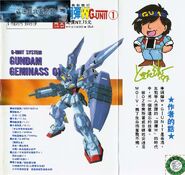 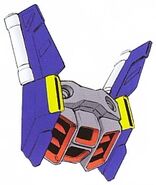 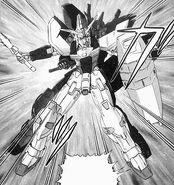 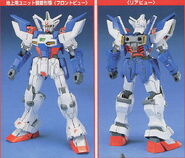 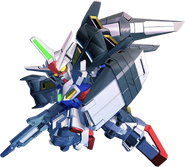