The OZ-19MASX Gundam Griepe is the ultimate G-UNIT, with high mobility in space and on earth. Secretly completed by Odel Bernett, its control system is specifically tuned for his younger brother, Odin Bernett, and the mobile suit played a key role in stopping OZ Prize and the OZ-15AGX Hydra Gundam. Like the OZX-GU01LOB Gundam L.O. Booster, the Griepe can transform into a high-speed flight mode, bolstered by a revolutionary propulsion engine developed by Mark Bernett, the late father of Odel and Odin.

Like the earlier G-UNITs, the Griepe has a modular design and the PX System which takes advantage of the pilot's increased adrenaline during combat and also increases the performance of the mobile suit. However, the system has a time limit which if passed has serious consequences for both the pilot and the suit. The suit can use a beam lancer and the hyper mega particle launcher in MS Mode, while its MA Mode mounts a buster mega particle cannon under its nose. There is also the Assault Mode, halfway between MS and MA Mode, for firing the cannon without fully transforming.

The PX system takes advantage of the pilot's increased adrenaline during combat and also increases the performance of the mobile suit, but does have a time limit which, if exceeded, has serious consequences for both the pilot and the suit. At Odin's request, the system's maximum operating time is extended beyond the safe level, allowing for PX Overdrive mode that vastly improves performance, while increasing the risk to the pilot's life.

Mounted on flexible joints, the wing-like parts of the Griepe are actually two powerful shields that can be used to defend against beam and physical attacks from various directions.

A system that allows Gundam Griepe to be controlled by the pilot's nervous system, reducing piloting strain.

Working under the secret identity of Silver Clown, MO-V pilot Odel Bernett secretly delivered the completed Gundam Griepe to his younger brother Odin in an abandoned resource asteroid. Odin used this powerful new mobile suit for the remainder of the conflict. Although Gundam Griepe was damaged in the final battle against OZ Prize leader Valder Farkill's Hydra Gundam, Odin utilized the mobile suit's modular design to his advantage and used parts from the other two G-UNITs to repair the Griepe, allowing him to destroy the Grand Chariot before it can attack MO-V. 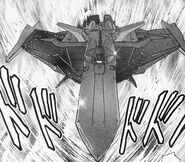 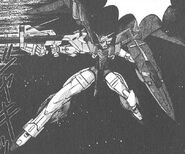 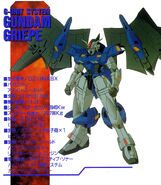 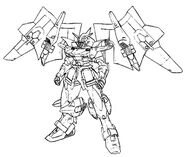 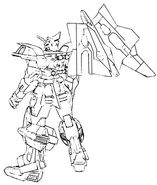 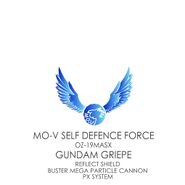