A large, heavily armored, transformable mobile suit developed by OZ for fortress defense, the Scorpio has two modes: Mobile Armor (MA) mode and Mobile Suit (MS) mode. The MA mode has high offensive power and powerful propulsion units that grant it high thrust, while the MS mode is better suited for close range and melee combat. Since the change from MA mode to MS mode requires the Scorpio to shed some of its armor and weaponry, the transformation seems to be irreversible during combat.

The Scorpio usually operates as an unmanned Mobile Doll, but through the use of the code "56WI", its Mobile Doll system can be deactivated, changing it to a manned machine. Its armaments include Beam Bayonets with both beam rifle and beam saber functions, an A.S Planet Defensor for defense, Micro-missiles stored in the chest and shoulders, and a Heat Rod that is only available in MA mode. As the Scorpio is 1.5 times bigger than regular mobile suit, it is not mass produced.

The Scorpio is equipped with two Beam Bayonets during MA mode, but only one Beam Bayonet is retained as a handheld weapon in MS mode. Combining the functions of a beam rifle and a beam saber, the weapon has an emitter mounted between its tips that can either fire powerful beams for ranged attacks or emit a beam blade for close combat. Additionally, the Beam Bayonets can also be used as physical ramming weapons when the Scorpio is charging at high speed while in MA mode.

A unique shield held in the Scorpio's left hand during MS mode. It is mounted on the rear during MA mode. It seems to be an enlarged version of the Virgo's Planet Defensors.

Small missiles fired from the chest and both shoulders. The Scorpio has a total of 30 micro-missiles, 10 stored in the chest and 10 in each shoulder.

A segmented, whip-like, melee weapon. It is only available in Scorpio's MA Mode and is attached to the rear.

A system that allows mobile suits to act autonomously.

The largest mobile suit in the After Colony Era, OZ deployed the Scorpio as a guard unit for the Mobile Doll factory of Vulkanus. In AC 196 (after the Eve War and before the Mariemaia Rebellion), several groups began searching for Vulkanus, which had drifted out of its stable orbit. The Scorpio attacked those who found the site, until Perfect Peace People leader Victor Gaintz used a code to disable its Mobile Doll system and become its pilot. Through the combined efforts of the five Gundam pilots, Victor Gaintz's plan was thwarted, and he was killed when the Scorpio was destroyed by Heero Yuy's Wing Gundam Zero.

Appearing in the manga, Mobile Suit Gundam Wing G-UNIT Operation Galiarest, it is a prototype of the Scorpio. Unlike the Scorpio, its backpack is fitted with an autonomous control unit. The backpack also powers its primary weapons: a pair of arm-mounted battleship-class beam cannons, via cables. At the bottom of these cannons are grenade launchers, which fire high-power electromagnetic waves (defenser nets) to restrict enemy movements. It is also armed with micro-missiles. The Prototype Scorpio first emerged from the White Fang occupied industrial space colony, Galiarest. After battling Odin Bernett and friends, this unmanned mobile suit was brought back to MO-V and changed into a manned unit for Roche Nattono. 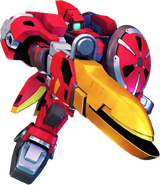 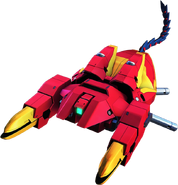