Developed by the Romefeller Foundation for the purpose of hunting down the five rebel Gundams, the Hydra was designed as a high-speed attacker. The Hydra Gundam is equipped with an Electro-Magnetic Field shield. By emitting a tense force field, the EMF shield can block many attacks and cover wide areas of the Gundam's body despite its small size. Its other armaments include a buster gun, two beam swords and two foldable shoulder claws. The shoulders claws mount a set of beam cannons, and can operate either on mounting arms, or act as wire-guided all-range attack units. The suit can transform into a high mobility mode known as 'High Mobility Mobile Armor Mode' by retracting its legs into its skirt armor, revealing additional thrusters.

The pair of Shoulder Claws are capable of both melee and ranged attacks as they are also equipped with beam cannons. Attached to the shoulders via foldable mounting arms, they can also be launched as wire-guided weapons that can alter their attack positions due to the small verniers installed. Thus, they are capable of performing "all-range attacks".

Stored on the Hydra's right shoulder, it is a detachable high-output beam weapon. The Buster Gun can be fired while mounted on the shoulder or when handheld.

The Hydra carries two beam swords for close combat, that when not in use are stored in its front thigh armor. By changing the weapon's output, the length of the beam blade can be altered. The Hydra's beam swords also have the unique ability to combine into a naginata form. Another unique ability is that they can be connected to the shoulder claws allowing the Hydra to perform long range melee attacks.

A defensive armament carried by the Hydra, similar to the OZ-02MD Virgo's Planet Defensors, the EMF shield emits an magnetic anti-field that can block both projectile and beam shots. When not in use, the shield can be stored on the Hydra's left shoulder.

A combat support system that, when activated, is capable of matching, if not exceeding the performance increase of the PX System seen in the Gundam Aesculapius.

While serving under Zechs Merquise in the elite OZ Specials, Valder Farkill racks up more individual kills against the United Earth Sphere Alliance than his entire unit combined. This bloody record earns him the nickname "Dark General of Destruction." After Valder assumes leadership of OZ Prize from Roche Nattono in late AC 195 he proves to be a formidable nemesis for the defenders of the remote colony MO-V as the pilot of the Hydra. At the conclusion of the Eve Wars on December 24, AC 195, Valder is killed in single combat by Odin Bernett with the OZ-19MASX Gundam Griepe. 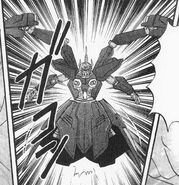 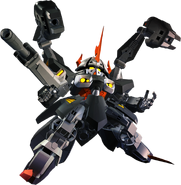