The OZ-14MS Gundam Aquarius is a unit from the SD Gundam G Generation games and a Mobile Suit from the After Colony timeline.

The OZ-14MS Gundam Aquarius' primary purpose was the destruction of mobile dolls; to that end, its most important feature was its ability to broadcast a virus that disables the enemy identification component of the MD system. Without the ability to recognize targets and attack, the mobile dolls would be helpless, making them easy pickings for either Gundam. Given heavy armor for defense, Aquarius featured powerful thrusters to let it fly in the atmosphere and keep up with Epyon; however, it had few vernier and apogee motors, resulting in its having high speed but low maneuverability. Since most of Aquarius's reactor output was concentrated in its thrusters and jamming pods, it actually lacked the ability to power beam weapons. As such, its only fixed weapons were a pair of heat rods, mounted in the forearms. For extended combat, Aquarius was intended to borrow the OZ-06MS Leo's 105mm rifle and shield.

A pair of segmented whip-like projected chains mounted in the Aquarius' forearms. When activated, the material becomes super-heated, allowing it to cut and burn through armor.

A high-powered cartridge gun, it fires beams at an excellent rate and can shoot accurately over a long range. An old-fashioned muzzle brake is fitted to improve its accuracy.

The same shell firing rifle used by the Leo. Because this weapon is based on older technology, it can be cheaply produced and can be used by just about any mobile suit. Designed for close to medium range shooting, it has an extremely fast firing rate, but low power round for round. A precision radar is mounted on top of the muzzle.

In order to increase defense against beam and physical attacks, the Aquarius can equip the same round shield as used by the Leo.

A unique feature of the Aquarius, these pods broadcast a virus that disables the IFF module of all surrounding Mobile Dolls in a 10 km radius, leaving them completely defenseless and making them easy pickings for either the Epyon or the Aquarius. However, as its name suggests, only Mobile Dolls are affected by the virus.

In September of After Colony 195, Treize Khushrenada resigned from his position as head of OZ to protest the Romefeller Foundation's development of mobile dolls. Fearing the influence that the charismatic Treize would have on their soldiers, Romefeller placed him under house arrest in his Luxembourg mansion. While there, Treize used data taken from the OZ-00MS Tallgeese and the five rebel Gundams to produce the OZ-13MS Gundam Epyon, the realization of his "gentleman soldier" ideal. Though Epyon would make its mark on history as the personal mobile suit of White Fang's Milliardo Peacecraft, much lesser known is the OZ-14MS Gundam Aquarius, Epyon's sister machine which Treize designed at the same time.

Information on Aquarius's deployment is uncertain. By some accounts, Treize left his confinement before it could be built. Others say that members of the Treize Faction happened upon Aquarius's plans at the mansion and had it constructed for their own use against White Fang. This information goes on to say that though Aquarius was completed, it was not ready in time to participate in the Eve Wars and was subsequently destroyed during the great disarmament following the Mariemaia Rebellion. 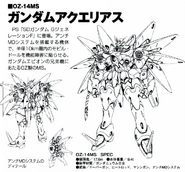