The OZ-13MS Gundam Epyon is a mobile suit introduced in Mobile Suit Gundam Wing. Originally piloted by Heero Yuy, it was later given to Zechs Merquise.

Based on data from the Tallgeese and the other Gundams, the Gundam Epyon was created by Treize Khushrenada while he was placed under confinement by the Romefeller Foundation. In keeping with Treize's philosophy, the Epyon eschews cowardly long-range weapons in favor of chivalrous close combat. However, when the suit becomes a part of White Fang, a pair of Vulcan guns are added to the head. Its main weapons are a segmented, whip-like heat rod mounted on a shield and a powerful beam sword whose energy is supplied by a direct connection to the Epyon's generator.

Treize also installed a modified version of the Zero System known as Epyon System in the cockpit, making this suit a powerful opponent. The Epyon can also transform into a "mobile armor" mode for high-speed flight and cruising in space. It resembles a mythological dragon in this mode, however, its primary weapons are inaccessible save for the Epyon Claws which are also used as landing gear in this form.

Gundam Epyon EW is Hajime Katoki's redesign of Epyon in a similar fashion to other EW version of the first five Gundams and included in New Mobile Report Gundam Wing: Frozen Teardrop as well as Mobile Suit Gundam Wing Endless Waltz: Glory of the Losers. It is later given additional equipment known as 'Sturm Und Drang' that can be used for both defense and offense.

The primary weapon of the Epyon, it is connected directly to the suit's powerplant via a cord as opposed to running on its own internal power source. This allows the length and the intensity of the beam blade to be adjusted according to the situation, and at maximum level, it can inflict damage severe enough to destroy objects as large as the Space Fortress Bulge.

Mounted on the forearms, they are used as landing gear in MA Mode. In combat, they can be used to tear through enemy armor.

A small shield mounted on the left arm, its surface has been treated with an anti-beam coating to provide protection against beam attacks. It mounts a heat rod at the bottom.

A segmented whip-like chain housed in Epyon's shield. It can be used to trip or entangle opponents, and even cut through mobile suits when heated. A single swipe with this weapon can destroy up to three OZ-06MS Leo.

Added later by the White Fang, the pair of head-mounted shell firing weapons have a high-rate of fire, but little power and are generally ineffective against mobile suits. However, they can damage lightly armored areas such as the sensors, and are ideal for shooting down small, lightly armored targets such as missiles, small vehicles, etc.

An additional equipment used by Gundam Epyon after Zechs Merquise joins the White Fang in Mobile Suit Gundam Wing Endless Waltz: Glory of the Losers manga. These small wing-like devices use similar technology to OZ-13MSX2 Mercurius's planet defensors and can be either attached to Epyon's forearms in "Defense Mode", generating powerful defensive force field capable of blocking XXXG-00W0 Wing Gundam Zero's twin buster rifle, or attached to the beam sword in "Zweihander Mode" to generate a massive beam blade. When using this equipment, the Epyon Shield is mounted on the rear skirt armor.

Mounted on the chest, it for gathering data that the cameras and antennas cannot. Used in close combat, it is of the same type as the Shenlong Gundam's.

Late in AC 195, Treize Khushrenada was relieved of his duties as the Commander of OZ and was placed under house-arrest. Treize had been intrigued by the Gundams and their pilots and so designed a Gundam which he called Epyon. Treize had a highly developed sense of honor and so designed the suit to be a "dueling" mobile suit, equipping it with short range weaponry only. Treize was also able to equip the Epyon's cockpit with a modified Zero System.

Treize had hoped that a Gundam pilot would come forth to pilot the suit, particularly Heero Yuy. Thus, Treize presented the Epyon Gundam to the Gundam Pilot Heero Yuy, when Heero had sought him out with the intention of assassinating him. Heero however, did not kill Treize and accepted the Epyon.

After boarding the mobile suit, Treize warned Heero not to be a 'winner' when piloting it, meaning that achieving victory should not be on his mind, only the fighting itself. When the Romefeller Foundation launched an invasion of the Sanc Kingdom, Heero piloted the Epyon into battle. Having not yet mastered the Zero System, however, Heero suffered a near-nervous breakdown and fled the battle. Relena's brother, Zechs Merquise, arrived in the XXXG-00W0 Wing Gundam Zero having heard of the invasion, but was too late. Zechs and Heero dueled in the Wing Zero and Epyon respectively, and fought themselves to a stalemate. Unable to determine a victory using their Zero Systems, both combatants ceased. The two exchanged suits with Heero taking the Wing Zero and Zechs taking the Epyon.

Soon after, Zechs began piloting Epyon the group known as the White Fang rose out of the ashes of the Treize Faction and claimed that they had been charged with defending the Colonies. The chief of the White Fang, Quinze, approached Zechs and offered him the leadership of the White Fang. Zechs accepted, using his birthname Milliardo Peacecraft, and continued to pilot the Epyon against the forces of the new Earth Sphere Unified Nation. Zechs flew Epyon against the Gundam Pilots in the final battle of the war in December of AC 195. In this battle, Zechs in Epyon, once again challenged Heero Yuy in the Wing Zero. The two fought on and around the gigantic space station Libra. The battle was once again a stalemate as they had reached the last surviving section of Libra, which was falling towards the Earth. Taking the fight inside Libra itself, the two fought until Epyon's left arm was severed, giving Heero a decisive win (in the terms of a duel, this would count as drawing first blood). As Heero/Wing Zero was about to self-destruct to finish the section of Libra off for good, Zechs convinced Heero to leave and he used Epyon to destroy the reactor which powered that section of the station. Both Zechs and Epyon were presumed to have been lost in the explosion.

In Mars Colony 0022 NEXT WINTER, the Epyon resurfaces, piloted once again by the leader of the revolting Lanigreen Republic, Zechs and engages in battle with the Epyon Bai (エピオンパイ, Epyon Bai?) piloted by Chang Wufei. The left arm has been rebuilt and twin beam cannons are added. It is referred to as the Epyon Ares.[1]

Also known as "Nataku". It is a customized white colored Epyon developed and piloted by Chang Wufei in New Mobile Report Gundam Wing: Frozen Teardrop.[1] It also has new weaponry.

In New Mobile Report Gundam Wing: Frozen Teardrop, the Epyon was reconstructed by the Lanigreen Republic and a pair of twin beam cannons were added to the legs (head portion in MA mode). These beam cannons are operable only in MA Mode and improves that mode's combat capabilities.

Epyon System activated (The Glory of the Losers (GotL) manga)

With WF-02MD Virgo II and Libra (From Gundam Perfect File) 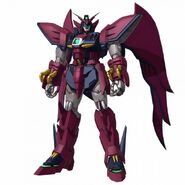 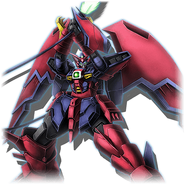 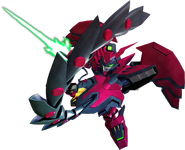 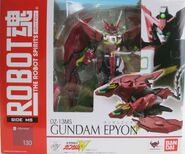