The OZ-13MSX2 Mercurius (aka Mercurius) is a mobile suit operated by OZ. Featured in the Mobile Suit Gundam Wing series, it was piloted by Heero Yuy and later by Quatre Raberba Winner. It was designed by Hajime Katoki.

The Mercurius was designed with defensive strategy in mind and was meant to operate alongside its offensive-based sibling unit, the OZ-13MSX1 Vayeate, with one covering the other when in battle. Its signature armament is a set of ten planet defensors, which are small disc-shaped objects that generate a defensive electromagnetic field to protect the Mercurius or an allied mobile suit from enemy's attack. It is also armed with a small beam gun and a large shield with integrated Beam Saber called "Crash Shield". Like the Vayeate, the Mercurius has a cover that defends its head sensors but limits vision. The Mercurius' planet defensors are later used in the OZ's mass production mobile doll, the OZ-02MD Virgo and its upgraded version, the WF-02MD Virgo II. A second Mercurius controlled by Mobile Doll AI System was later built by White Fang.

A ranged beam weapon that gives the Mercurius a short-to-mid ranged firepower. It possesses less power than the standard beam rifle, but because of its small size, it is ideal for the close combat role of the Mercurius.

A shield that is integrated with a powerful beam saber, this weapon allows the Mercurius to block and attack almost simultaneously.

The Mercurius was piloted by captured Gundam pilot Heero Yuy, whose combat data was recorded to be used for the Virgo's AI control system. When Quatre Raberba Winner went on a rampage with the newly built XXXG-00W0 Wing Gundam Zero, Heero was dispatched with OZ infiltrator and Vayeate's pilot, Trowa Barton, to capture or destroy the renegade Gundam. Heero and Trowa fought Quatre to a standstill, and Quatre surrendered after he thought he had killed Trowa. After the battle, the Wing Gundam Zero, the damaged Mercurius and the wreckage of the Vayeate were recovered by OZ.

The damaged Mercurius was eventually set to self-destructed by Quatre in an attempt to destroy the captured Wing Zero as he escaped with Heero. A second Mercurius was later built by the White Fang, who had the Gundam scientists install it with a mobile doll control system based on Heero's combat data. This second Mercurius was deployed alongside a second Vayeate to pursue Hilde Schbeiker, but they were destroyed by Duo Maxwell's XXXG-01D2 Gundam Deathscythe Hell. 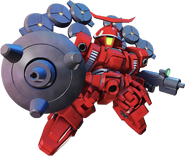 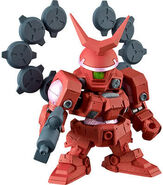