The OZ-13MSX2B-S Mercurius Suivant is the upgraded version of the OZ-13MSX2 Mercurius operated by the OZ Prize in New Mobile Report Gundam Wing Dual Story: G-Unit.

A small disc-shaped object that generate an electromagnetic field, the Mercurius Suivant is equipped with twenty planet defensors on its back to defend itself or an allied mobile suit. A period of powerful shots against the planet defensors can cause them to be weakened and lose their ability to produce an electromagnetic field. When low on energy, they can return to the mobile suit for recharging.

A weapon that allows the Mercurius Suivant to block and attack almost simultaneously, it is a shield that is integrated with a powerful beam saber, enabling it to engage in close combat when required.

The Mercurius Suivant was piloted by Luna Armonia in the service of OZ Prize and fought against Odin Bernett and Roche Nattono. It was destroyed by the Grand Chariot's beam cannon on the orders of Valder Farkill when he deemed the Armonia sisters to be no longer of any use to him. Miraculously, Luna survived this. 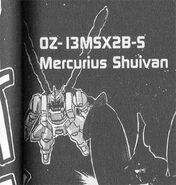 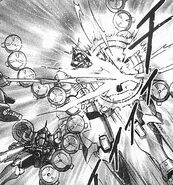 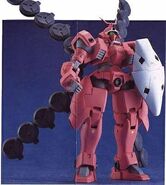 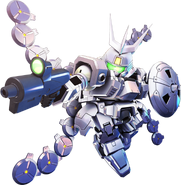