The OZ-13MSX1 Vayeate (A.K.A. Vayeate) is a mobile suit forcefully developed for OZ. Featured in the anime Mobile Suit Gundam Wing, it was mainly piloted by Trowa Barton.

Whereas the OZ-13MSX2 Mercurius was designed as a defensive mobile suit, the Vayeate was designed primarily as an offensive unit. Both suits were designed to operate together, with one covering the other when in battle. The Vayeate, built from the same basic frame as its Mercurius twin, was armed only with a large beam cannon. This cannon was designed to provide a damaging blow almost equivalent to that of the XXXG-01W Wing Gundam's powerful buster rifle. To overcome the problem of the buster rifle's limited charge, the scientists designed a large energy collector, consisting primarily of a compact thermonuclear reactor and a particle accelerator. This provides the Vayeate's beam cannon, which is connected to the backpack by an energy cable, with a virtually limitless "ammunition" charge. The Vayeate and its brother, Mercurius, mounts a cover to protect their head sensor, but it also limits vision. A second unit controlled by a Mobile Doll AI System was later built by White Fang.

A powerful Beam Cannon that was designed to give a devastating blow to its enemies, almost as effective as the Buster Rifle of the XXXG-01W Wing Gundam. It has an almost infinite "ammunition" charge due to the large energy collector mounted to the back of Vayeate. It is one of a few weapons powerful enough to melt through Gundanium Alloy.

This external energy generator serves to power the Vayeate's beam cannon. Its cover opens to dissipate the heat produced when energy production is at its peak.

While the five Gundam pilots were fighting on Earth to defeat the OZ and the Alliance forces, the scientists who created their mobile suits were captured by OZ and forced to work on next generation mobile suits capable of putting an end to the Gundam pilots' activities. The five scientists set to work and came up with a pair of mobile suit designs - the OZ-13MSX1 Vayeate and the OZ-13MSX2 Mercurius. The Vayeate was piloted by Gundam pilot Trowa Barton, who was acting as a double agent then. The Vayeate was eventually damaged beyond repair in a battle against the XXXG-00W0 Wing Gundam Zero, piloted by Gundam pilot Quatre Raberba Winner, who had became emotionally unstable.

The Vayeate's combat data and design were later utilized in the development of the OZ-02MD Virgo. Subsequently, another Vayeate was built by White Fang alongside another Mercurius as a pair of mobile dolls, both programmed with the recorded data of the originals' pilots. Shortly after their completion, the two mobile dolls were launched to intercept and destroy Hilde Schbeiker who had stolen important data from the battleship Libra. The machines would have succeeded in the mission if not for the intervention of Duo Maxwell piloting his XXXG-01D2 Gundam Deathscythe Hell who managed to destroy both mobile dolls. 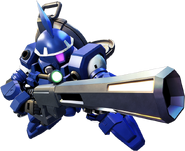 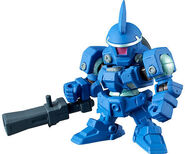