The OZ-13MSX1B-S Vayeate Suivant is the upgraded version of the OZ-13MSX1 Vayeate developed by OZ and operated by the OZ Prize. It appeared in New Mobile Report Gundam Wing Dual Story: G-Unit.

A set of powerful Beam Cannons that was designed to give a devastating blow to its enemies, almost as effective as the buster rifle of the XXXG-01W Wing Gundam. These cannons have virtually limitless "ammunition" charge due to the 2 large energy collectors mounted to back of the Vayeate Suivant. It is one of the few weapons powerful enough to melt through Gundanium Alloy.

These external energy generators serve to power the Vayeate Suivant's beam cannons. Their covers open to dissipate the heat produced when energy production is at its peak.

The Vayeate Suivant was piloted by Soris Armonia in the service of OZ Prize and fought against Odin Bernett and Roche Nattono. It was destroyed by the Grand Chariot's beam cannon on the orders of Valder Farkill when he deemed the Armonia sisters to be no longer of any use to him. Miraculously, Soris survived this. 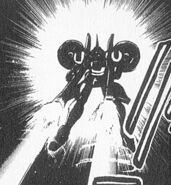 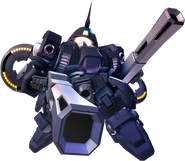 Retrieved from "https://gundam.fandom.com/wiki/OZ-13MSX1B-S_Vayeate_Suivant?oldid=496491"
Community content is available under CC-BY-SA unless otherwise noted.