The OZ-11MS Capricorn is a Mobile Doll unit based on the mass-produced OZ-06MS Leo. It appears solely in the semi-official one-issue comic New Mobile Report Gundam Wing Sidestory: Tiel's Impulse.

Originally intended to be used in Dekim Barton's second attempt to carry out Operation Meteor, it was produced in large numbers but ultimately scrapped when Barton obtained the plans for the Serpent. 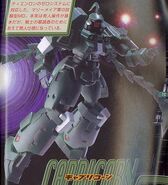