The OZ-10VMSX-2 Gundam Burnlapius (also known as the Prometheus Gundam in the Tokyopop version) is a mobile suit that appeared in the manga New Mobile Report Gundam Wing Dual Story: G-Unit. It was piloted by Kratz Silvy.

Based off the OZ-10VMSX Gundam Aesculapius, the Burnlapius was designed to be a heavy assault mobile suit capable of transforming into a stronger "duel mode" for close combat. In this configuration, the backpack is mounted onto the head and the shoulder-mounted Golem Claws mount over the hands like a pair of gloves. It has a copy of the PX system, but lacks a limiter as Dr. Berg deliberately chose to not install one.

A sword that mounts over the right arm of the unit.

A pair of rapid-fire beam guns are mounted on the top near the hilt of the blade.

A pair of claws that are connected to the unit's arms in "duel mode", they can be extended for medium-range combat.

Equipped on the left arm, it emits an magnetic anti-field that can block both projectile and beam shots.

The PX System takes advantage of the increased adrenaline a pilot feels during combat and also increases the performance of the mobile suit, but does have a time limit which, if exceeded, has serious consequences for both the pilot and the suit. Dr. Berg disabled the system's limiters for Burnlapius, allowing for the PX Overdrive mode that vastly improves performance, while also increasing risk to the pilot's life.

The Burnlapius was intended to be fielded against MO-V and their G-UNITs. In its second sortie, the PX System overloaded after being pushed past normal operating limits despite the warnings of his opponent who was aware of the dangers of its overuse. The Burnlapius exploded from the overload, killing Kratz Silvy. 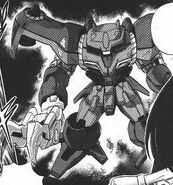 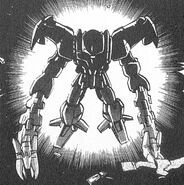 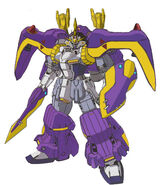 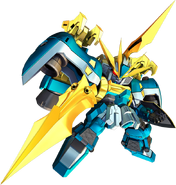 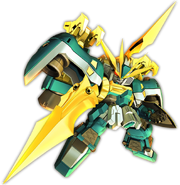