OZ-09MMS Pisces is one of two mass-produced transformable aquatic mobile suits developed by OZ. It is featured in Mobile Suit Gundam Wing.

Like the OZ-08MMS Cancer, the Pisces can switch between two modes. Its submarine mode is for high speed movements underwater, while its mobile suit mode is more humanoid than the Cancer's with stubby legs. The suit's propellers in submarine mode can be used as claws in its mobile suit mode, and they contain small, extendable manipulators for delicate operations. The Pisces's primary weapons are torpedoes fired from its shoulder-mounted torpedo launchers, which can be used for underwater attacks and to bombard coastal targets after the suit partially surface in mobile suit mode. It can also use depth charges to destroy enemy ships, and has a searchlight on each shoulder for underwater search operations.

Fired from the shoulder-mounted torpedo launchers, six in each shoulder. They have the power to destroy submarines in one shot, and can also perform surface to surface missile attacks when the Pisces surfaces.

After sneaking up to enemy ship unnoticed, the Pisces can attach multiple depth charges to deal serious damages.

The Pisces was used throughout A.C. 195 by OZ. One such mission was to search for the XXXG-01W Wing Gundam that had been abandoned on the ocean floor, but the two Pisces and two Cancers that found the Gundam were ambushed and destroyed by the XXXG-01D Gundam Deathscythe. Later, the Pisces usually in conjunction with Cancers are used in multiple battles that took place in the ocean, on the surface, or in coastal regions. Two Pisces were used by Lucrezia Noin and Sally Po to prevent OZ from acquiring the Wing Gundam, destroying six Cancers and their submarine carrier while retrieving the Gundam. Pisces were last seen when the Romefeller Foundation conquered the Sanc Kingdom. 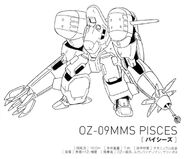