The OZ-08MMS Cancer is one of two transformable aquatic mobile suits developed by OZ. It is featured in Mobile Suit Gundam Wing.

Alongside the OZ-09MMS Pisces, the Cancer was developed by the OZ for aquatic use. It was designed with an emphasis on underwater cruising capabilities, thus despite being a mobile suit, it had no legs. In return, it had excellent mobility in the water. The Cancer maneuvers using the screw propellers on each arm. Each arm also contained torpedo launchers that can be loaded with torpedoes and anti-ground missiles. The suit could also used its pincer-like claws to grapple enemy unit in close range. A pair of searchlights are mounted on the underside of its body for underwater search operations.

Launched from the Cancer's arm-mounted torpedo launchers, the torpedoes are used for aquatic combat and can be fired at point-blank after the suit caught the enemy in its pincers.

From the torpedo launchers, the Cancer can also fire anti-ground missiles to attack coastal and even aerial targets.

The Cancer was used throughout A.C. 195 by OZ forces. One of its first known missions was to search for the XXXG-01W Wing Gundam that had been abandoned on the ocean floor. However the one Cancer and two Pisces that found the Gundam were ambushed and destroyed by the XXXG-01D Gundam Deathscythe. Later, the Cancers and Pisces were used in multiple battles that took place in the ocean, on the surface, or in coastal regions. The Cancers were last seen when the Romefeller Foundation conquered the Sanc Kingdom. 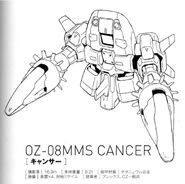 A claw opens to fire torpedoes in MS mode