The OZ-07MS Tragos is a mobile suit designed by OZ. It is featured in Mobile Suit Gundam Wing.

A ground-based MS developed for support based on the OZ-06MS Leo, the Tragos generally has better performance than the Leo in this specific environment, except for melee combat capability. The Tragos' legs can be fitted with an optional hover unit. However, on uneven terrain inaccessible by the hover unit, the Tragos reverts to its original bipedal MS form, resulting in a drop in mobility.

The light armament of the Tragos. The particle beam fired from a beam rifle can penetrate almost any armor that has not been treated with specific counter-measures.

The heavy armament of the Tragos. Two of these can be mounted, one on each shoulder.

An optional propulsion system can be attached over its legs for more mobility and speed. It can be jettisoned if not needed in combat. 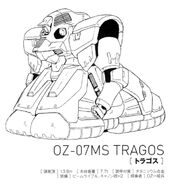 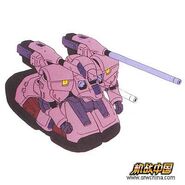 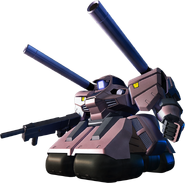 Retrieved from "https://gundam.fandom.com/wiki/OZ-07MS_Tragos?oldid=469646"
Community content is available under CC-BY-SA unless otherwise noted.