Template:Infobox/Mobile Weapon Ver.2 The OZ-06MS Leo is a mass-produced general purpose mobile suit in the After Colony timeline. The unit is featured in Mobile Suit Gundam Wing.

When the OZ-00MS Tallgeese mobile suit prototype proved too expensive and unfeasible for most pilots to handle, the Tallgeese's design was downgraded into a simpler, less-powerful unit. Naming their mobile suits after signs of the Zodiac, OZ's first mass-produced unit was called the OZ-06MS Leo. The Leo would serve as the mainstay of the mobile suit forces for the Earth Alliance military, the Specials force, and later OZ and its Romefeller Foundation masters.

The Leo gains its adaptability through the hardpoints on its shoulder armor pieces to mount various types of weaponry, and also the hardpoints in the back that allow it to mount different backpacks. It uses a similar leg unit to the Tallgeese.

First introduced into service in AC 175, the Leo was slowly upgraded over the years leading up to the outbreak of total war in AC 195. By that time, the Leo had actually changed very little from earlier models. The primary reason for the Leo's long service record was its simple adaptability: in addition to a wide variety of hand weapons, the Leo could be outfitted with a winged thruster pack for limited atmospheric flight capability.

The shield is a thick sheet of armor designed to take severe punishment that would normally destroy a mobile suit. Since the introduction of beam weaponry, shields have been treated with an anti-beam coating allowing it to withstand several beam shots before the coating wears off. Typically physical shields can only take so much damage before they succumb to the pressure and break. A shield can be equipped to either arm of the Leo in order to increase defense against both beam and physical attacks. The shield the Leo uses is similar to the one used by the Tallgeese, and like the one used by the Tallgeese stores two beam sabers.

The Leo is equipped with two beam sabers, stored within the shield. The principle of these close combat weapons is energy being focused into a beam with a sword shape, and used to melt and cut through even the toughest armor. One can be used as a reserve weapon, or both can be used simultaneously in a twin sword fashion.[1]

For ground combat use, the Leo is equipped with a 105mm shell firing rifle. Because this weapon is based on older technology, it can be cheaply produced and can be used by just about any mobile suit. The weapon has no where near the power of a beam rifle, thus its attacks can be stopped by a healthy layer of armor. Designed for close to medium range shooting, it has an extremely fast firing rate, but low power round for round. A precision radar is mounted on top of the muzzle.[2] A stock can be unfolded to dock with the shoulder armor.[3]

Replacing the standard 105mm Rifle is a Beam Rifle for space use. The particle beam fired from a beam rifle can penetrate almost any armor that has not been treated with specific counter-measures. While designed for space use, it can also be effectively used in atmospheric conditions.[4] Like most beam weapons of the period, it is powered by a replaceable energy cap. If the beam rifle runs out of energy, the current energy cap can be replaced by a new one.[5]

Beside the Beam Rifle, some Leo's are instead equipped with a short barrel beam rifle, also designed for space use. Despite their small size, the rifles have a high firing rate, and they are still powerful enough to destroy an enemy unit with a single shot.[6]

Some Leos were seen carries a Bazooka as an optional weapon. Held with both arms and sits over the right shoulder when in use. The bazooka has a long body to minimize recoil.[7] It features a similar sensor system to the head sensors of the Leo. While very powerful, the Bazooka had a slow rate of fire and fairly limited ammunition. Most oftenly used to take out slow, heavily armored targets.[8]

This high-powered cartridge gun is the most powerful weapon in OZ's arsenal, easily capable of destroying a Leo. Also sitting on the right shoulder, it is held and fired by the Leo's right hand. It's fitted with an old-fashioned muzzle brake to improve its accuracy. Though the dober gun can be used by a standard Leo, the recoil from firing it can be uncontrollably severe for any mobile suit other than the Tallgeese. This is the only weapon in the OZ's arsenal that can actually inflict damage on Gundanium alloy.[9]

A close-combat weapon borrowed from the XXXG-01D2 Gundam Deathscythe Hell.

A weapon borrowed from the XXXG-01W Wing Gundam, it can fire either a narrow beam akin to that of a beam rifle, or a huge blast like that of a beam cannon. Its energy supply allows only three shots in the latter mode.

The OZ-06MS Leo was the first Mass production mobile suit used by OZ, designed as a scaled-down version of the Tallgeese, which was deemed too expensive for mass production. The lead developer of the original prototype Leo was Seis Clark. Although lightly armed and is obviously rather difficult to pilot effectively, the Leo proved superior to anything produced by the Space Colonies. The base Leo was equipped with a Beam rifle and a shield which contained a pair of beam sabers, thus the Leo was equipped for almost anything, and it could also be loaded with a standard rifle or heavier dober gun. Later, almost all Leos were equipped with vernier backpacks for space combat. The aging Leo was eventually phased out for the newer OZ-12SMS Taurus and OZ-02MD Virgo mobile suits, the Leo's legacy finally ending with the Serpent, one of the toughest non-Gundam mobile suits in the After Colony timeline.

Over the years, from the basic Leo, designer and engineers developed many variants for different combat situations.

Leo Early Type: An older version of the OZ-06MS, the Leo Early Type was the original version prior to being upgraded over the years up until AC 195. It features a simpler head design, less armor on the knees and ankles and has differently designed shoulders without the extra armor plates. Despite its age, this version of the Leo was still in use in more remote areas of Earth, including Colonel Bunto's breakaway nation in former China.

Leo Space Type: Requiring a mobile suit force to help police (read "blockade") travel and commerce between the space colonies, OZ and the Earth Alliance adapted the standard Leo for space use with the addition of a cylindrical booster backpack equipped with rocket and vernier thrusters. This Leo variant also carried a beam rifle similar to that of the standard Leo, except that it was fitted with a radar disc for targeting in place of the usual optical sensor. The color scheme for this version is mostly purple, but there were also a few that were painted blue as well. There were also several ground combat Leo's hastily refitted for space use as seen in the opening and later scenes of the OVA Gundam Wing Endless Waltz.

Leo EWAC Type: A mobile suit introduced in the G-Unit manga. The OZ-06MS EWAC Leo is a variant of the standard Leo Space Type. It is used for reconnaissance and information-gathering (EWAC stands for Early Warning and Caution). The most notable change to the basic Leo design is the modification of the head unit into a high-power dish radome.

Leo Flight Pack: A winged thruster pack for limited atmospheric flight capability that mounts on its back, and it can also mount additional thrusters on the sides of the thighs.

Leo Parachute Pack: A small parachute backpack that's used to slow it's descent after being dropped from the transport planes and is jettisoned upon landing.

Leo Type II (Chimera): Introduced in New Mobile Report Gundam Wing: Frozen Teardrop, it was a prototype version of the Leo used in early military campaigns such as that led by Treize against rebel factions in Mogadishu. At Treize's insistence, these Leos were painted white.

Leo Type IV (Greif): Featured in the Gundam Wing novelization, New Mobile Report Gundam Wing: Frozen Teardrop, and New Mobile Report Gundam Wing: Glory of the Defeated. Resembles the Tallgeese even more, and features the high speed flight capabilities of the Aries. The cannon is developed from the Tragos, the backpack verniers from the Aries, and the head crown from the Tallgeese. Rebels at the Marius Plant of the Lunar Factory used black-painted Greifs in their rebellion in AC 186.

Leo Valder Farkill Custom: Featured in New Mobile Report Gundam Wing: G-UNIT, this Leo was the custom unit of OZ Prize leader Valder Farkill while he served under Treize Khushrenada. Although it's appearance is distinct from other Leos, very little is known about its specifications. 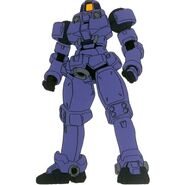 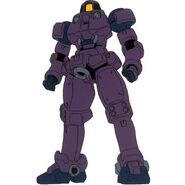 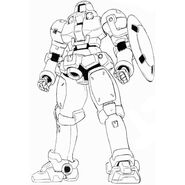 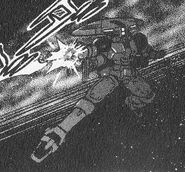 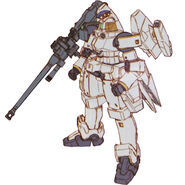 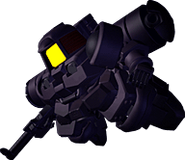