A custom machine dedicated to Roche, the leader of the Stardust Knights, the three generals who lead the OZ Prize. It is characterized by its unconventional appearance reminiscent of a Western knight and its red coloring. It's an machine that emphasizes balance. Its weapons are a beam musket, beam duel sabers, and a diffuser cloak.

The primary shooting armament of the Leo-S, it is a beam rifle customized to look like an matchlock rifle.

A cloth cloak treated with an anti-beam coating to protect the mobile suit from beam shots. It could also be used to conceal the Leo-S' actual fighting stance. 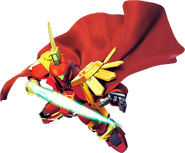