A custom machine designed exclusively for Kratz of the Stardust Knights. It features a feminine form that doesn't fit the pilot. The arms and legs have been replaced with those of the Aries, and other modifications have been made to emphasize mobility. Weapons include a beam duel lancer, active jammer reed, shoulder shields, and a super charged beam cannon.

A melee weapon that emits a large, spear-shaped beam.

A large, long-range beam weapon, it can destroy multiple enemy machines with a single shot. 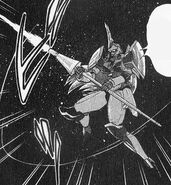 The Leo-R using its beam lance