A Gunpla based on the mass-produced Leo that appears in Mobile Suit Gundam Wing.[1][2] Countless numbers of Leo NPDs are deployed throughout the many Dimensions of the online game "Gunpla Battle Nexus Online" (GBN), they are piloted by the game's Non-Player Divers (NPD) and function as friendly or hostile AI-controlled Mobile Suits (NPDMS) depending on the programming.[1][2] Inheriting the original Leo's high versatility[2], the Leo NPD can also equip the former's weapons and equipment, such as the machine gun and the space backpack. It can also utilize weapons and equipment from other Gundam series.[2]

There are multiple variations of the Leo NPD's head units and shoulder armor.[1][2] These differences are to create distinctions between deployment areas as well as to identify whether the unit is a foe or ally.[2] There is also the possibility that Leo NPDs with special head units are set as destruction targets of highly difficult missions or are hidden NPD lurking in the Dimension.[2] Additionally, the color of the Leo NPD's camera unit changes depending on the difficulty of the mission.[2] Other settings of the Leo NPD, such as its strength and weapon capabilities, can also be altered as well.

The Leo NPD wields the same beam rifle as the original Leo. The particle beam fired from a beam rifle can penetrate almost any armor that has not been treated with specific counter-measures.

Looks identical to the original Leo's 105mm Rifle. This physical projectile firing weapon can be changed into a beam machine gun depending on the setting.[2]

Same weapon as used by the original Leo, it is typically mounted on the right shoulder. It has an excellent firing rate and can shoot accurately over a long range. The Leo NPD can be configured to mount a dober gun on each shoulder. It is also shown that two dober guns can be conjoined into a single handheld weapon, allowing the Leo NPD to hold up to four dober guns.

In order to increase defense against beam and physical attacks, the Leo NPD can equip the same round shield as used by the Leo. The Leo NPD can be configured to carry up to four shields, one on each shoulder, and one held in each hand.

Like with the original Leo, the Leo NPD is equipped with two beam sabers, stored behind its shield. These close combat weapons generated a blade-shaped beam to melt and cut through enemy's armor. They can have their maximum output adjusted depending on the settings by GBN.[2]

The Leo NPD can be equipped with the same pair of shoulder-mounted cannons as the Leo Cannon Type.

The same weapon as used by the Gundam Sandrock, its blade is super heated when in use to cut through armor. The Leo NPD can store a pair of heat shotel on its back. 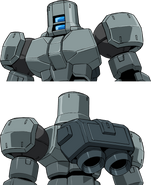 A group of Leo NPD 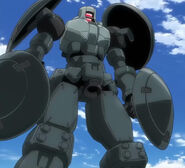 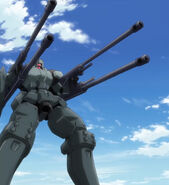