The Tallgeese Flugel is a variant of the OZ-00MS Tallgeese created by Mike Howard, who has outfitted it for space use. The original back-mounted thruster units are replaced by four angelic wing binders lined with many thrusters, granting the Tallgeese great speed and manoeuvrability in space. The two larger wings can function as shields when positioned in front of the suit.

The Tallgeese's standard equipment. It uses a cartridge system and fires beams from its long barrel. One shot can easily penetrate MS armor.

As its name implies, the "Tempest" Heat Lance uses thermal energy to heat the lance to super-high temperatures for penetrating the armor of other mobile weapons. It was built as an anti-Gundam measure based on the late Walker's data. It can also emit energy, canceling out enemy's beam bullets. Can be fixed on the arm or be handheld by adding an optional gun grip.

The Tallgeese Flugel is equipped with two beam sabers stored within the pylons that connect its two smaller wings to the back. These close combat weapons focused energy into a blade-shaped beam to melt and cut through enemy's armor.

The Tallgeese Flugel can carry a round shield to defend against beam and physical attacks. It hangs off the shoulder, granting a free hand to hold other weapons.

Four large missile launchers can be mounted in pairs on each of the Tallgeese Flugel's shoulders, the missiles' large size made them ideal anti-ship weapons.

The Tallgeese Flugel was built to self-destruct should the pilot choose to. A remote detonator is placed within the cockpit and if a dire situation arrives, the pilot can destroy the Mobile Suit. The system was designed to overload its power systems and has enough explosive power to destroy several city blocks. It's a last option tactic if the pilot is incapable of protecting the Mobile Suit, while not allowing it to fall into enemy hands. It also can be used as one large explosive device to eradicate large targets. 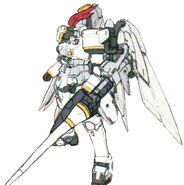 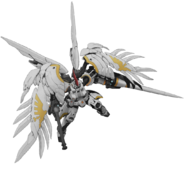 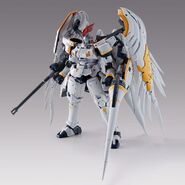 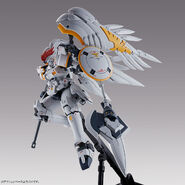 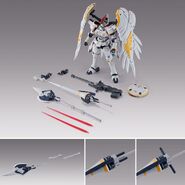