The OZ-00MS Tallgeese (aka Tallgeese) is the first in a line of three mobile suits depicted in the Mobile Suit Gundam Wing series. In the anime, it is stated that the first Tallgeese was the original armed mobile suit, and is the common ancestor of both the Gundams (specifically their prototype, the XXXG-00W0 Wing Gundam Zero) and the mass-produced military mobile suits (most notably the OZ-06MS Leo and its variants) depicted. It was first test piloted after its restoration by an OZ soldier named Otto, and later by its most prominent pilot, Zechs Merquise.

Designed by the Gundam Scientists, the Tallgeese was a well rounded unit featuring both long range and melee weapons, and also heavy armor coupled with high power boosters. The suit features powerful "Super Vernier" boosters that are capable of producing acceleration of about 15 Gs, but they also put a lot of strain on the pilot. To solve this problem and reduce production costs, the Tallgeese's design was simplified to create the Leo. After Zechs defected from OZ, Mike Howard, one of the original designers of the Tallgeese, equipped the suit with a large detachable booster unit that allows it to escape the Earth's atmosphere.

In the EW version, a "Tempest" Heat Lance and Halberd were added to its arsenal, and the suit was eventually upgraded into the Tallgeese Flügel whereby the "Super Vernier" boosters were replaced with wing binders for better mobility in space.

This high-powered cartridge gun is the most powerful weapon in OZ's arsenal, easily capable of destroying a Leo. It's fitted with an old-fashioned muzzle brake to improve its accuracy. Though the dober gun can be used by a standard Leo, the recoil from firing it can be uncontrollably severe for any mobile suit other than the Tallgeese.

The Tallgeese carries a round shield to increase defense against both beam and physical attacks. It hangs off the Tallgeese's shoulder, granting the suit a free hand to hold other weapons if required. The shield also stores a pair of beam sabers.

The beam saber is a small cylindrical device held in the mobile suit's hands when operated and is powered by an energy capacitor that is recharged from special racks. The beam saber is capable of cutting through any metal that has not been treated with anti-beam coating. The Tallgeese is equipped with a pair of beam saber stored in a recharge rack located in the shield.

A handheld missile pod can be used for anti-mobile suit and anti-ship combat. While effective against heavy-armored enemies, the missile pod carries fairly little ammunition.

As its name implies, the "Tempest" Heat Lance uses thermal energy to heat the lance to super-high temperatures which allows the lance to penetrate the armor of other mobile weapons. This weapon was built as an anti-Gundam measure based on the late Walker's data. Can be fixed on the arm or be handheld using another grip. This weapon is only used by the EW Version of the Tallgeese.

The Mobile Suit sized counterpart to the human weapon, the Halberd consists of an axe blade topped with a spike mounted on a long staff. It can be used for slicing and stabbing attacks. It also can be broken down into parts allowing it to be assembled on the battlefield. This weapon is only used by the EW Version of the Tallgeese.

The Tallgeese was built to self-destruct should the pilot choose to. A remote detonator is placed within the cockpit and if a dire situation arrives, the pilot can destroy the Mobile Suit. The system was designed to overload its power systems and has enough explosive power to destroy several city blocks. It's a last option tactic if the pilot is incapable of protecting the Mobile Suit, while not allowing it to fall into enemy hands. It also can be used as one large explosive device to eradicate large targets.

At nearly twice the size of the Tallgeese, this optional equipment is fitted onto the Tallgeese for space operations. Has many different modes to suit the situation. Parts of the unit can be attached to reduce weight for short term space travel. The entire unit is fitted on for long term space travel, and the entire unit can be jettisoned during combat to avoid the additional weight.

The Tallgeese was designed in After Colony 170 by the Gundam Scientists and served as the prototype for all subsequent mobile suits. It was extremely powerful, but expensive to mass-produce and rough on its pilots, so its design was later simplified, resulting in the Leo. In After Colony 195, the suit was restored and used by Zechs Merquise to combat the Gundams. Between episodes 18 and 22, Zechs' Tallgeese is modified for space travel, allowing Zechs (as Milliardo Peacecraft) to visit the colonies. In episode 34, Zech's Tallgeese is destroyed, via self destruction, allowing Zechs to claim the Wing Zero. The remaining spare parts of Zech's Tallgeese were later assembled into a Tallgeese for Treize Khushrenada, and christened the Tallgeese II.

Another Tallgeese, nicknamed 'Shilong', was developed by Master O of the Long Clan (of which Chang Wufei was a member) and was destroyed while defending the Long Clan's colony in After Colony 194. This Tallgeese appeared in the Episode Zero and Glory of Losers manga, and lacked a mask over its camera, making it more visually similar to a Leo.[1]

Tallgeese and Zech in a picture for Gundam Wing, issued in Cartoon Network promotion 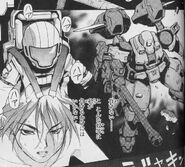 Retrieved from "https://gundam.fandom.com/wiki/OZ-00MS_Tallgeese?oldid=362992"
Community content is available under CC-BY-SA unless otherwise noted.